JPY Up, Commodity Currencies & GBP Down in “flight to safety”; US PPI 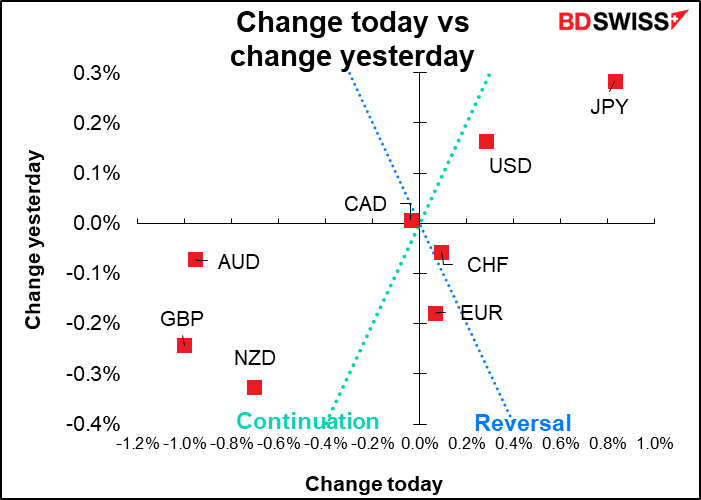 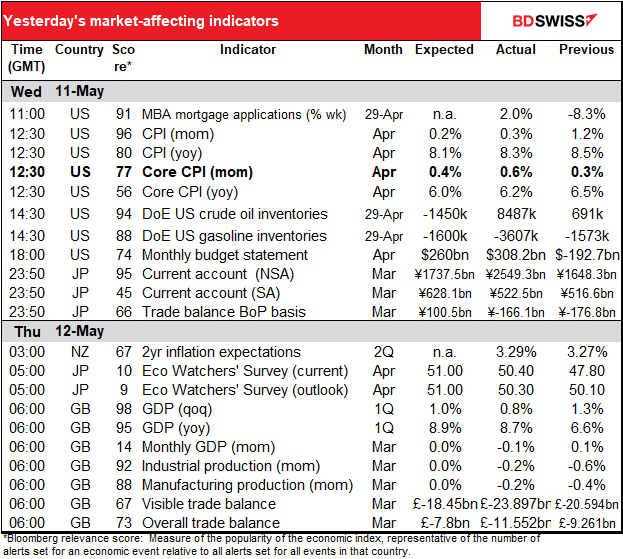 What a day! The big event of course was the US consumer price index (CPI) for April. As it turns out the yoy rate of increase did fall thanks to base effects, but not as much as expected. Furthermore – and this was the main point – the mom change was higher than expected, particularly in the core CPI, which accelerated more than expected. The three-month annualized change in the core CPI did fall a bit, but not as much as expected. This development is worrisome because it suggests that inflation can’t be blamed solely on Ukraine and higher energy prices. Rather, price increases are spreading out among a wider variety of goods & services. 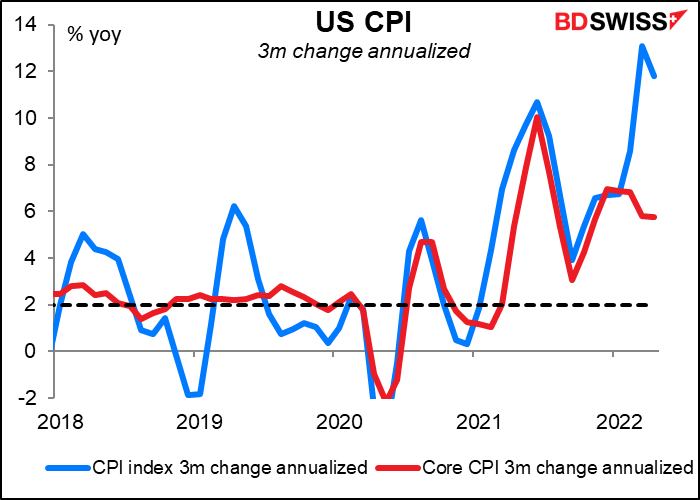 Airfares were responsible for a lot of the increase. 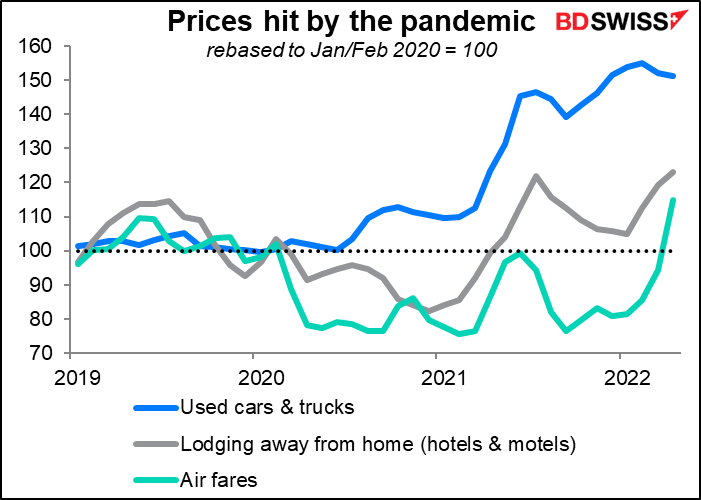 But other prices that have little to do with the pandemic also rose, such as housing prices. Owners’ equivalent rent, which makes up nearly a quarter of the CPI basket,  was up +0.45%, the fastest mom increase since June 2006. Rents rose +0.56% mom, the second-highest increase since Dec. 1987. 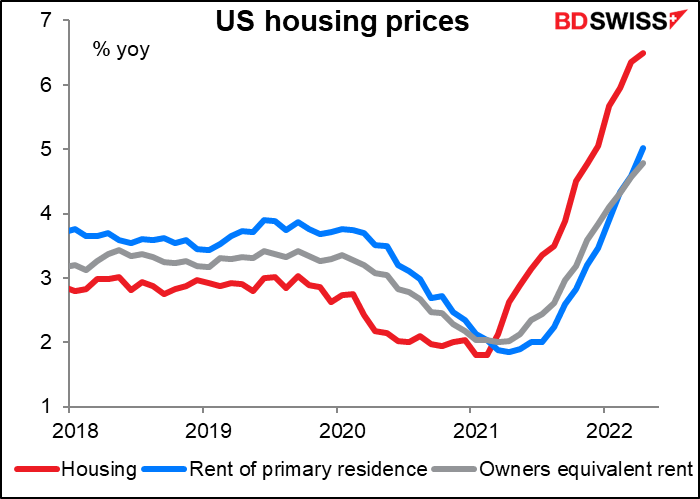 The Atlanta Fed produces an index of the CPI broken down between “flexible” prices (those that change frequently, like airfares and gasoline) and “sticky” prices (those that change infrequently, like Netflix subscriptions). What it showed is that while flexible prices fell in the latest month, sticky prices resumed their uptrend. This is worrisome as it implies that inflation is becoming more entrenched in the economy. 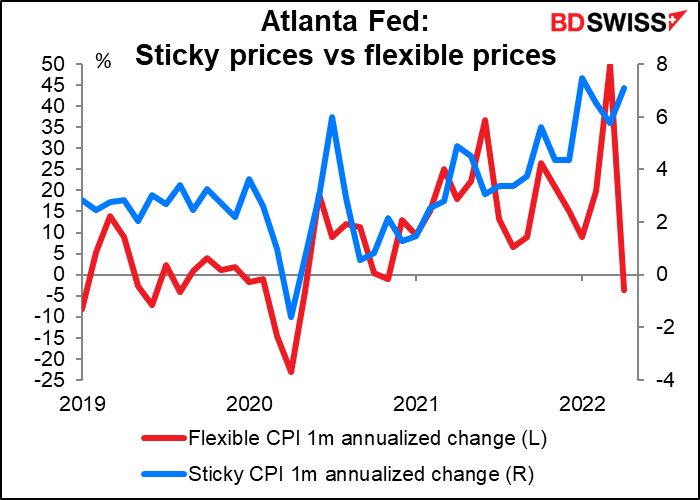 Five-year inflation expectations rose, as you might expect, except in Canada.

But five-year bond yields fell, again except for Canada. Why did Canadian bond yields rise so much even as inflation expectations fell?

The higher-than-expected figure didn’t have that much impact on Fed rate expectations. Expectations for the next year or so rose somewhat while longer-dated expectations fell by 2 bps. 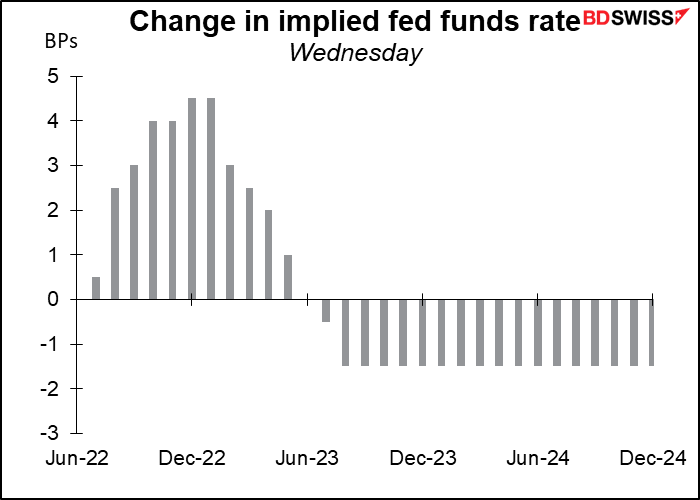 The overall reaction to the figures was surprising. US 10-year Treasury yields lept more than 14 bps in the half hour following the release. But then people started to price in the possibility of the Fed tightening so much that the US economy would go into recession and 10-year yields finished US trading down 7 bps. At the short end of the curve 2-year yields finished the day +2.6 bps on the likelihood of larger rate hikes at future meetings, but have since come down from there and are now 3 bps below their Tuesday closing levels.

The movement in the FX market was notable. Let’s look first at today’s winner, JPY. USD/JPY (red line) was falling (JPY rising, USD falling) before the CPI came out. When the CPI was released, USD/JPY shot up as the beat was considered USD-positive.

But then a funny thing happened (well, not funny to those of us heavily invested in the US stock market, but anyway…). The US stock market (blue line) first plunged on the report, then tried to recover, but that failed and it fell further and further, led by the tech and mega-cap shares. That’s when USD/JPY started moving along with the S&P 500 in a “risk-off” move.

I have no confidence in the JPY rally (fall in USD/JPY), which I expect will be only temporary. According to yesterday’s Bank of Japan “Summary of Opinions” from the April 27-28 meeting, the Monetary Policy Board  unanimously dismissed the idea of tightening policy to counter the yen’s decline. “While communication to the public on the relationship between monetary policy and foreign exchange rates is important, one reason for the yen’s recent depreciation is that economic conditions in Japan have been different from those in the United States and Europe, and it is not appropriate that the Bank change its policy with the aim of controlling foreign exchange rates” was a typical comment. All members quoted argued in favor of maintaining or even boosting the BoJ’s policy stimulus. Thus the monetary policy divergence that has been fueling yen weakness is set to continue and that should provide the basis for a weaker yen (higher USD/JPY) in the future, in my view.

GBP was the worst-performing currency of those that I follow. While we might look at some fundamental cause for the decline, such as the increasing risk of a trade war with the EU over the Northern Ireland protocol, in fact GBP/USD followed the S&P 500 pretty closely too.

As did AUD. I think therefore we don’t have to go very far to explain what happened yesterday in the FX market – it was pure risk aversion.

The small rise in USD on the day is particularly noteworthy. That suggests inflation concerns and anticipation of rising rates are having less and less of a marginal effect on the dollar as the market reaches its limits for what it can imagine happening. Of course if we get the fed fund rate up at 6% as some people have suggested then that’s likely to be a different story.

Bitcoin and other cryptocurrencies were down sharply in what some people are calling the “Lehman Bros. moment” for the asset class. Others are calling it “the Bear Stearns moment,” i.e. the plunge that proceeds the final collapse. Still others are calling it a great time to “buy the dip.” I have no view on the matter as I don’t follow cryptocurrencies. They are not subject to fundamental analysis but rather trade solely on market sentiment, i.e. the market basics of fear and greed. That’s what technical analysis is for. Yesterday was clearly a day of fear, but who knows? Today may see the return of greed.

Bitcoin’s correlation with the S&P 500 has hit a record high. 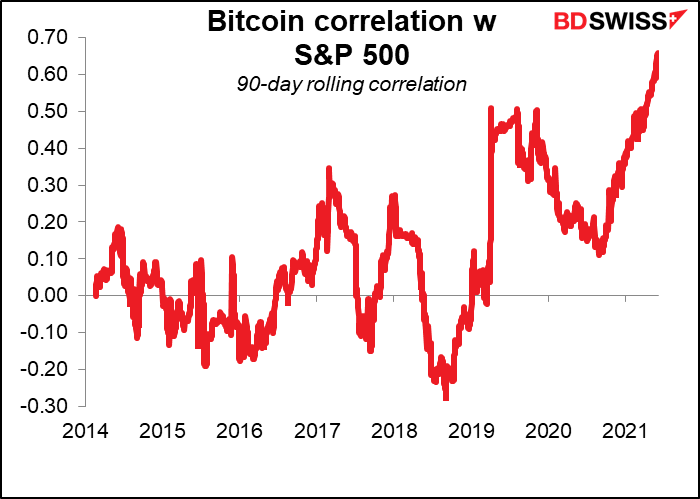 Bitcoin is touted as a hedge against inflation, but looking at the data since the start of 2021, the tendency has been for Bitcoin’s price to fall when the US CPI beat estimates, meaning that it’s trading as a typical risky asset that will be depressed by higher interest rates. Yesterday’s fall was much greater than would’ve been expected given the size of the beat (1.05 standard deviations). That suggests increasingly nervous holders. 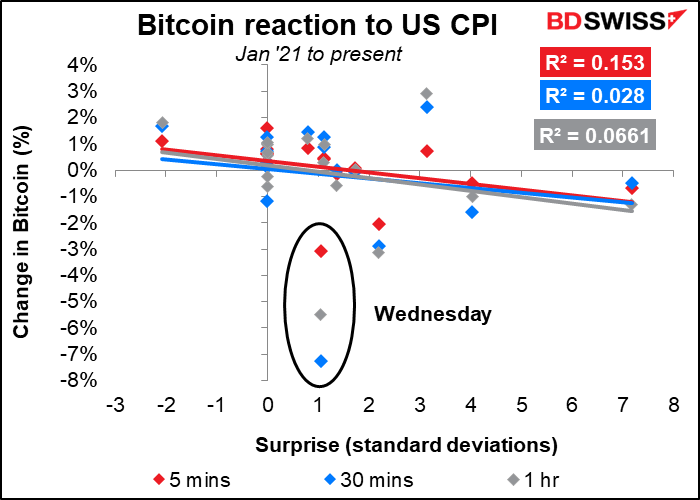 Still, we have to keep things in perspective. Depending on when you bought, you could still be making a lot of money in Bitcoin.

Not if you bought since the beginning of last year – you’d have been better off in an S&P 500 fund. 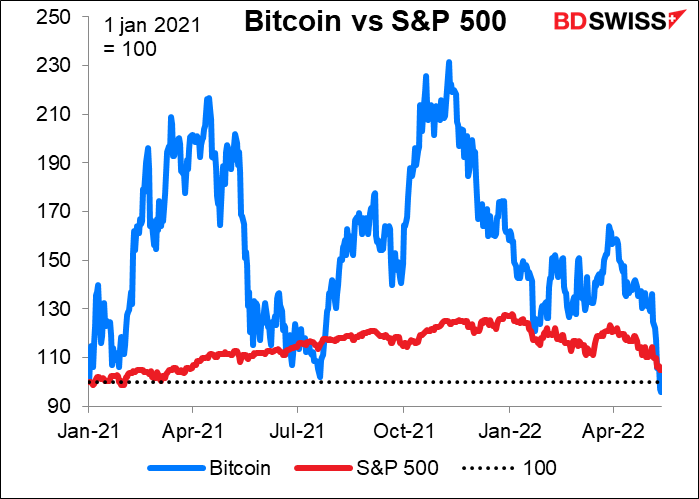 But if you’re a hard-core HODLER who bought before the pandemic, you’re still sitting on some nice gains. 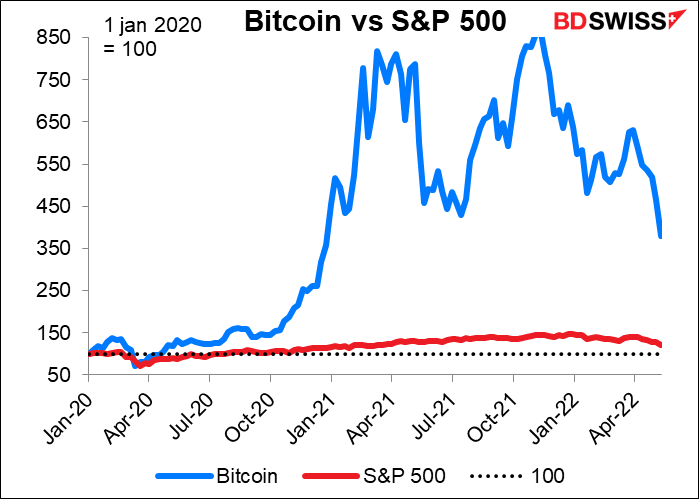 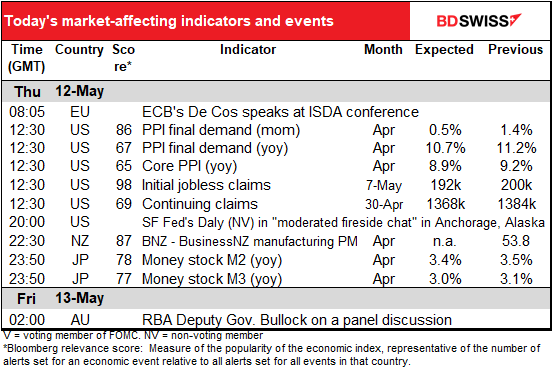 All quiet during the European day.

Once the US opens, we get the producer price index (PPI). This gets a lot of attention because people assume that it’s a precursor to the consumer price index (CPI) – that is, if the PPI goes up, companies will have to raise their prices sometime in the future, but it’s more complicated than that. You can read about the relationship between the two in my coruscatingly brilliant report, The PPI and the CPI: what’s the connection?

In any event, the PPI is expected to slow somewhat, another sign that perhaps inflation has peaked even without significant tightening by the Fed. Naturally people will be looking closely at the month-on-month rate of change to see if there’s any more hope there than in the CPI. Even if the annual rate of change falls, the PPI it remains wildly above the Fed’s 2% target so it’s way too early to say “mission accomplished.” 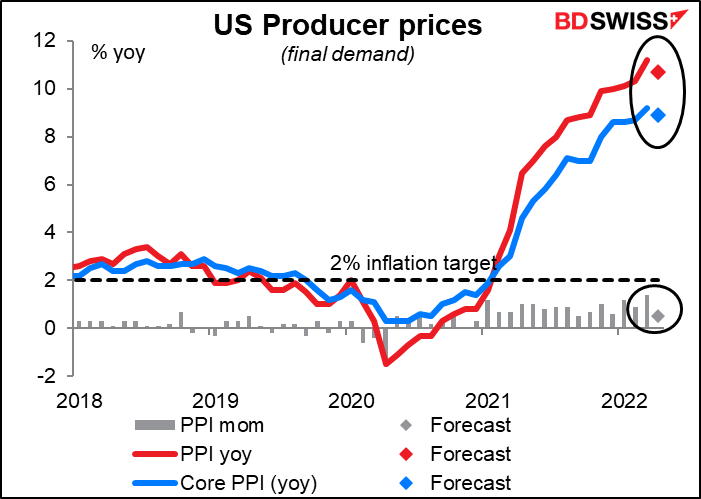 It’s not just base effects. The annualized 3-month change is also expected to drop, both for the headline figure and the core figure (which excludes energy). So maybe this is the start of a slowdown in inflation and the Fed won’t have to tighten as much as expected, That would tend to be negative for the dollar. 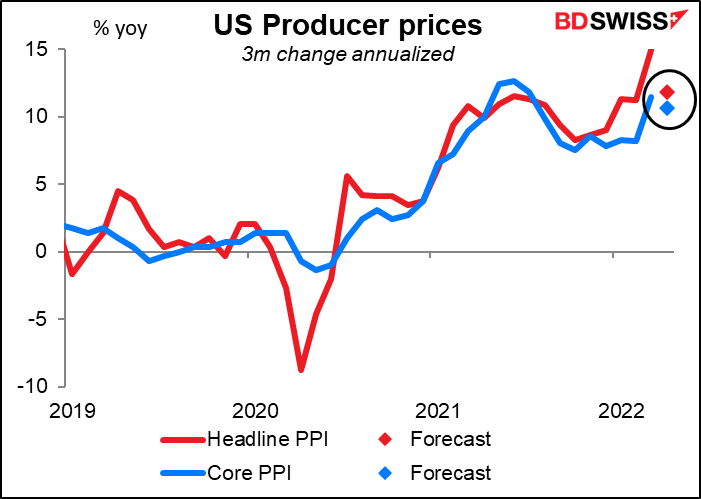 After that it’s the tired oil initial jobless claims. I have to say though that they seem to be starting to turn up. Is this a warning sign? 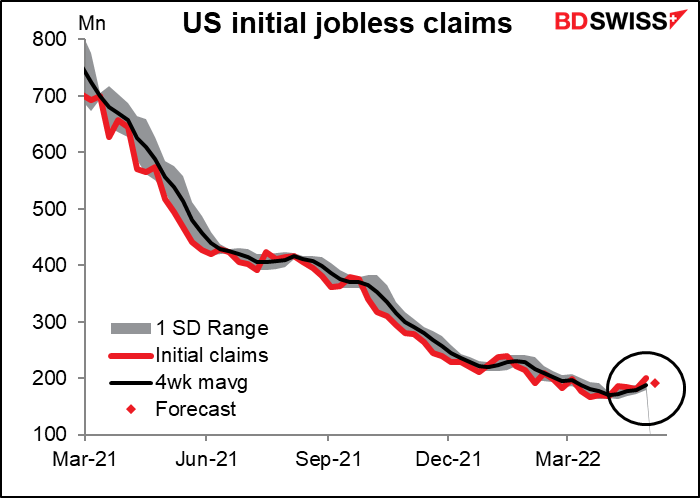 I don’t think it’s anything to worry about. If we look at the seasonally unadjusted figure it’s still around the lowest ever. 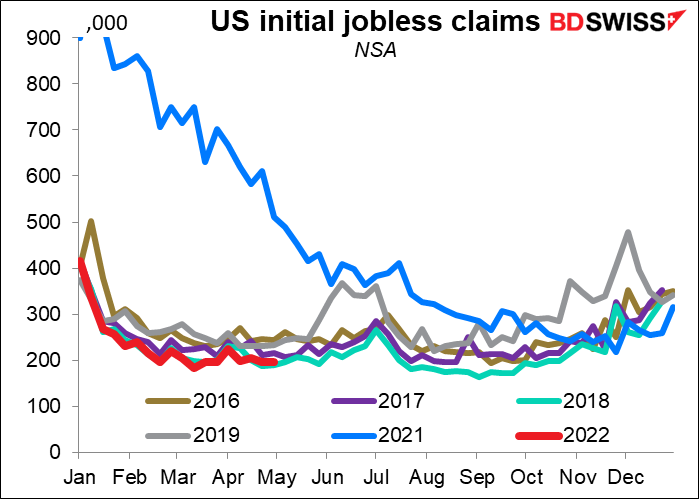 Overnight we get the Japan money supply data. M2 and M3 growth are expected to slow. In theory that should be positive for JPY but will it be? I doubt it. In fact I think no one in the FX market will pay any attention to it at all. Nonetheless since it has a relatively high Bloomberg relevance score and I have little else to write about today I’m including it. 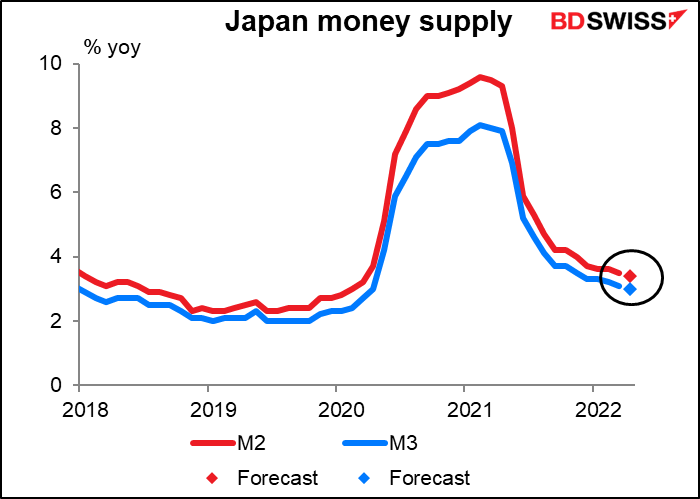 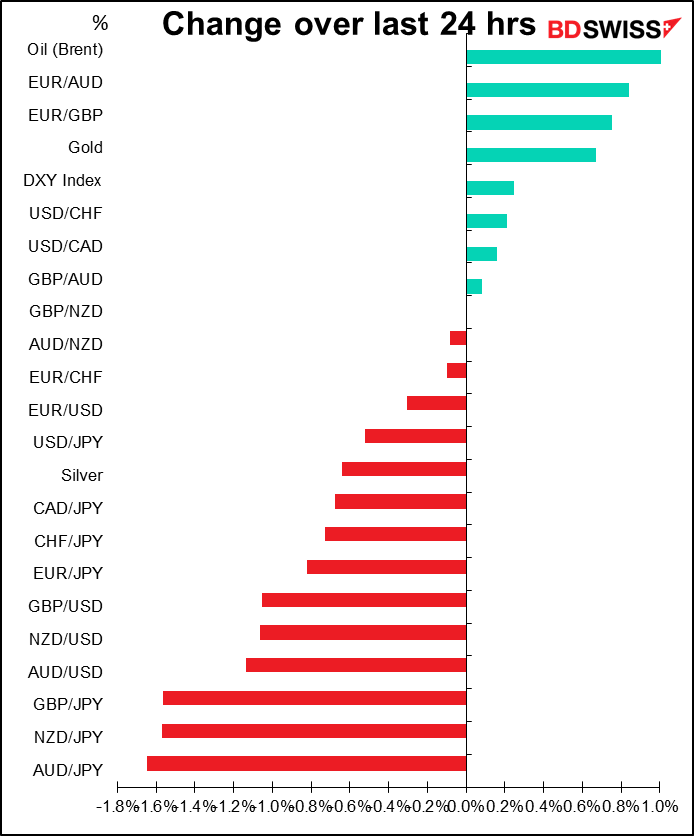