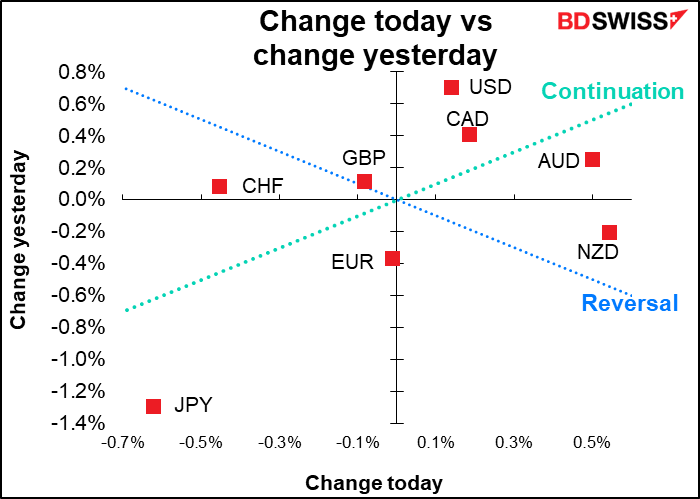 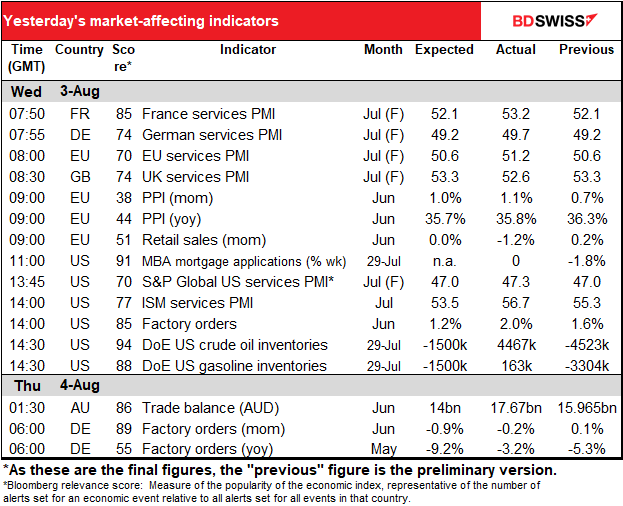 After two consecutive quarters of negative GDP in the US, commentators were quick to throw the R-word – “recession” – around. But yesterday’s data threw that idea into question. The S&P Global service-sector purchasing managers indices (PMIs) were revised up almost across the board (except in the UK). But the key point was the blowout US non-manufacturing PMI from the Institute of Supply Management (ISM), which put paid to that idea, at least for now. 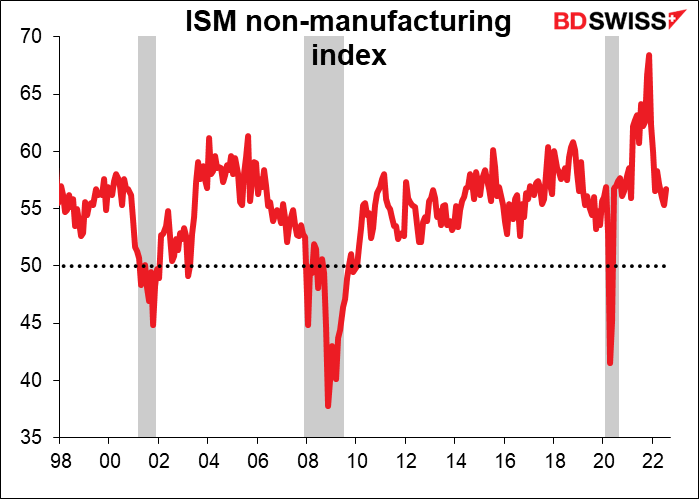 The financial markets however still seem to disagree. The US 2yr/10yr yield curve remains inverted, indicating that people think a recession is coming sometime in the next year to 1 ½ years. 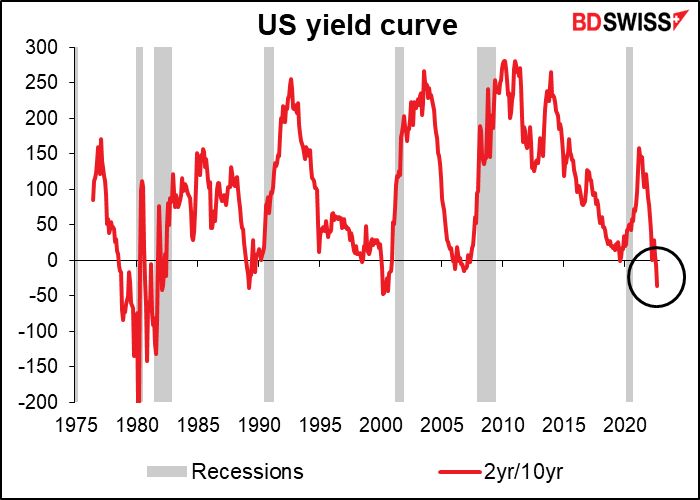 Part of that may be due to further changes in people’s estimates for what’s going to happen with policy rates. In the US, we had more comments from Fed officials. St. Louis Fed President Bullard (V), who’s been quite vocal recently, repeated his desire to front-load rate hikes and to bring the fed funds rate to 3.75% – 4.00% this year. He pointed out that the Dallas Fed’s trimmed mean inflation rate, a gauge he watches closely, has shown no sign of turning around yet and hit the highest level since the early 1980s in June. 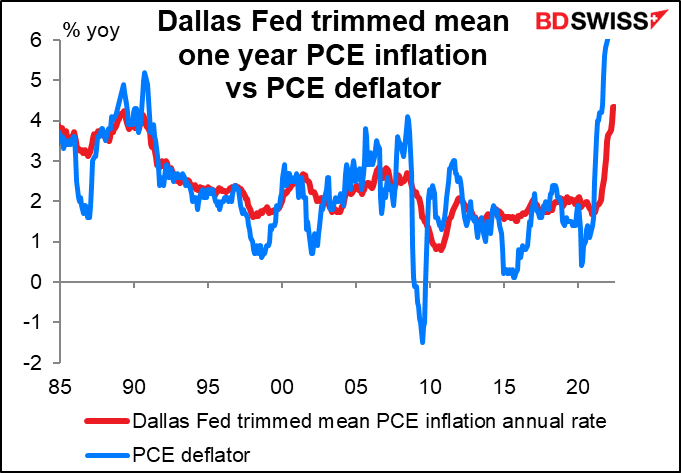 Meanwhile the also talkative Minneapolis Fed President Kashkari, the #1 dove on the Federal Open Market Committee (FOMC), said that the idea of the Fed cutting rates in 2023 seems like “a very unlikely scenario right now given what I know about the underlying inflation dynamics,” even though that’s exactly what the market is predicting.

I agree with Mr. Kashkari.

As a result, 2-year yields, which are particularly sensitive to expectations of changes in policy rates, rose around the world – except in Japan, of course.

And once again, that was among the main things moving the FX market. 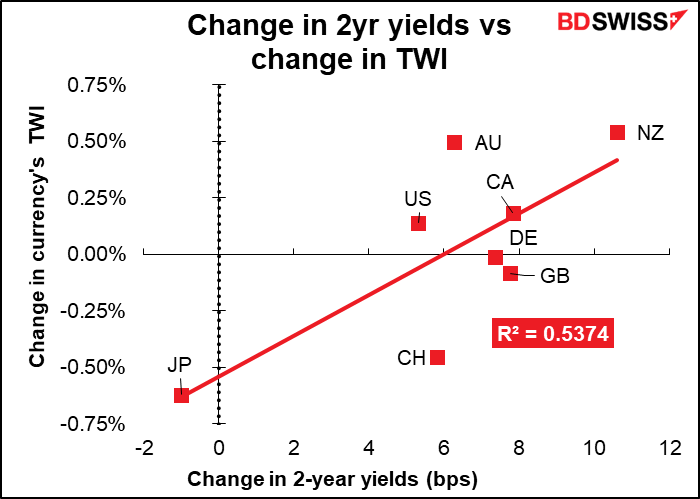 It’s worth noting that stock markets rallied on the signs of stronger-than-expected growth. This is significant because recently they’ve been rallying on signs of weaker growth, which would mean that the Fed was likely to stop hiking rates and start cutting early on. So stock markets rise when growth looks strong and rise when growth looks weak. Who said markets are consistent?

Yesterday’s OPEC+ meeting agreed on a minuscule 100k barrel-a-day (b/d) increase in production.  Given that their current production is estimated at around 45.6mn b/d, this is only a 0.22% increase or some 0.1% of global demand – hardly worth meeting to decide that. It’s just a crumb thrown to Presidents Biden and Macron in response to their recent pleas for more oil.

So if OPEC+ isn’t going to rise to the rescue of the global oil market and the economy is in better shape than people thought, why was oil down another 3.2% yesterday?

Because demand doesn’t seem to be as strong as people had expected. Oil is starting to pile up in US inventories. 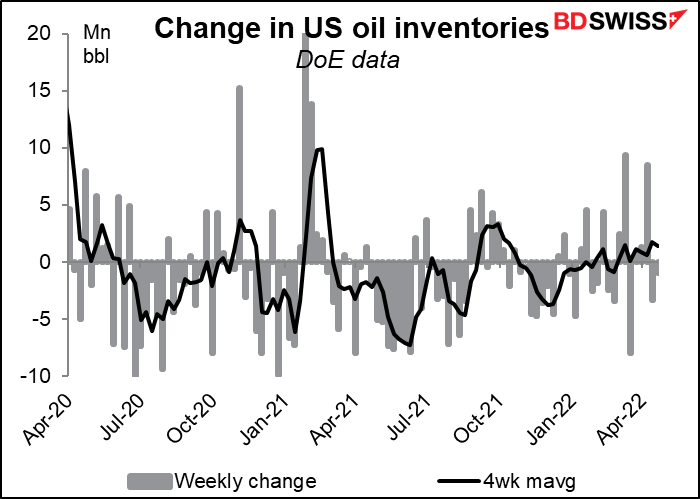 Gasoline inventories are rising as Americans are driving less than they were before the pandemic. While inventories aren’t out of hand, they don’t imply the kind of urgent demand that the oil market is implying. 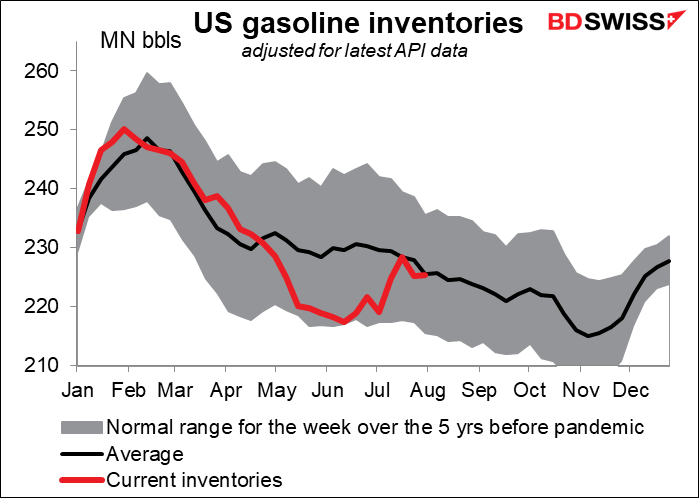 And of course everyone is worried about China and its growth prospects. 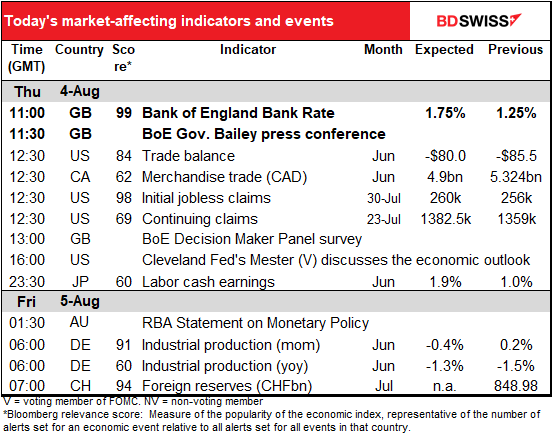 The big event today is the Bank of England meeting. The market expects a 50 bps hike at this meeting and the next one too. 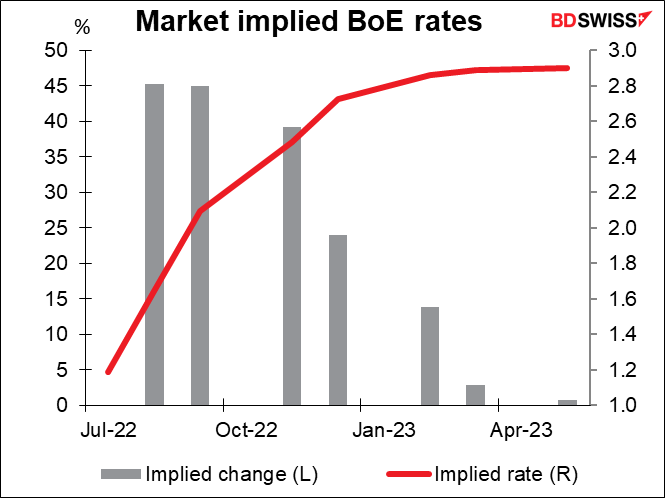 That’s probably because the BoE is so far behind the curve. Their policy rate hasn’t gone up much relative to how high their inflation is. Looking at the G20 countries plus the major currencies (excluding outliers like Turkey and Russia) the UK’s inflation is the highest but the central bank’s rate hikes are quite middling. So far the Old Lady of Threadneedle Street has been one of the more conservative central banks; she hiked 15 bps last December, then 25 bps in February, March, May, and June for a total of 115 bps. Compare that with the 75 bps hike that the Fed did in one go in July! 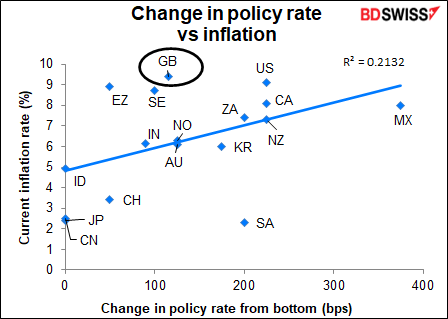 As I said back in June in my Weekly Outlook, 50 is the new 25. Given that almost all the other central banks are hiking by 50 bps, and a weak sterling pushes up prices, I think they’re likely to go for 50 bps this time.  Failure to hike by 50 bps would be negative for sterling, in my view.

After that it depends on what they say about their forward guidance. As we saw with the Reserve Bank of Australia on Tuesday, hiking by the amount that’s already expected doesn’t necessarily do anything for the currency. So much will depend on the vote. If it’s unanimous, then GBP would probably rally. I expect though a 7-2 vote (with Cunliffe and Tenreyro voting for only 25 bps). That would probably be neutral. Anything less than that would be negative for sterling.

An important factor in their forward guidance will be any changes that they make in their forecasts. Right now they seem stuck squarely in the middle of the “growth vs inflation” conundrum: they look for zero growth with high inflation, i.e. stagflation. How quickly they expect inflation to come down is probably the deciding factor in how rapidly they’ll have to hike rates. 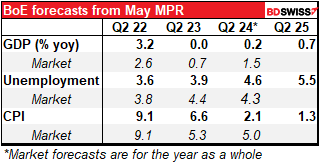 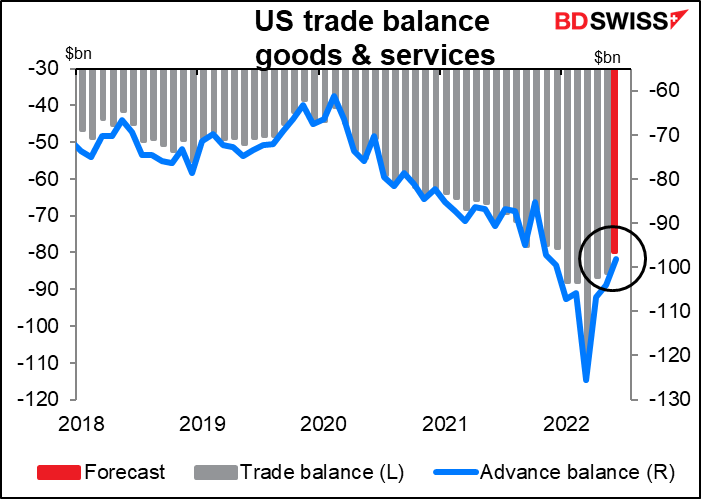 Initial jobless claims are coming back into the spotlight as they gradually creep up. The market expects a small increase of 4k this week. While that’s not much, it’s the direction that matters: it would be continuing the upward trend. Together with the worse-than-expected result from Tuesday’s Job Offers and Labor Turnover Survey (openings fell to 10.7mn from 11.25mn vs 11.0mn expected) this would be another bit of evidence that the labor market is indeed slowing. That will set the stage for tomorrow’s US nonfarm payrolls. 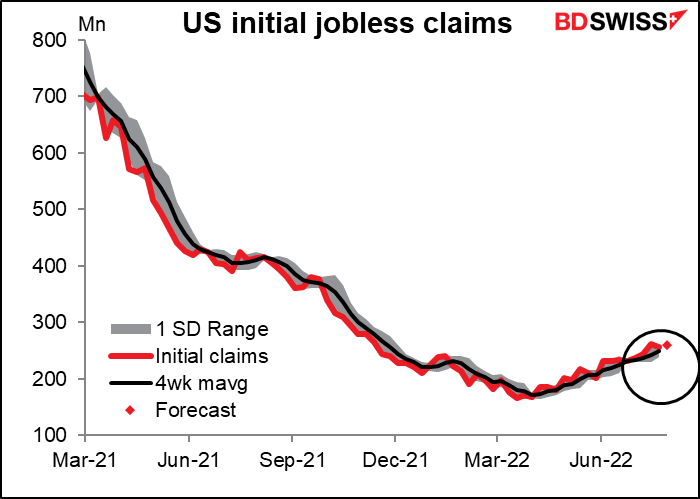 Overnight, Japan releases labor cash earnings. Nobody cares about this except me, since my daughter will soon be entering into the workforce. Maybe if earnings growth ever surpasses 2% yoy for any length of time this will start to be a market factor, but not now. 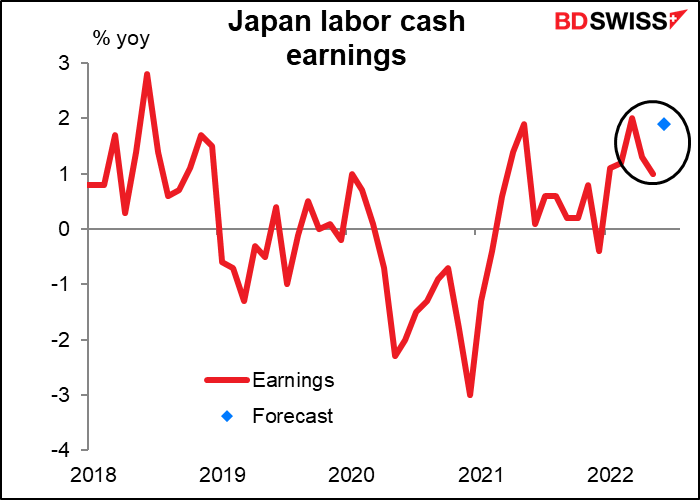 The Reserve Bank of Australia (RBA) Monetary Policy Statement, containing the RBA’s new forecasts, will be released. We got a hint of these in the statement following Tuesday’s RBA meeting. “The Bank’s central forecast is for CPI inflation to be around 7¾ per cent over 2022, a little above 4 per cent over 2023 and around 3 per cent over 2024,” they said, plus they expect “GDP growth of 3¼ per cent over 2022 and 1¾ per cent in each of the following two years.” This is higher inflation and lower growth (apparently) than they expected back in May. Raising the inflation forecast could boost AUD as it might imply that the RBA will have to raise rates higher than expected.

Then Friday morning, Germany announces its industrial production. It’s expected to be down month-on-month, as seems to be the trend nowadays. This morning’s factory orders were -0.4% mom, better than the -0.9% mom expected but not great. In any event, with the S&P Global Germany manufacturing purchasing managers’ index (PMI) falling into contractionary territory in July (49.3), it’s not going to be any surprise in the future to see German manufacturing output decline. EUR- 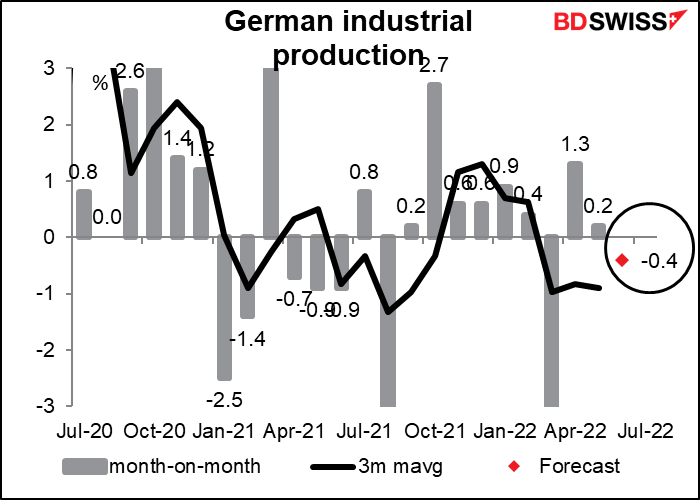 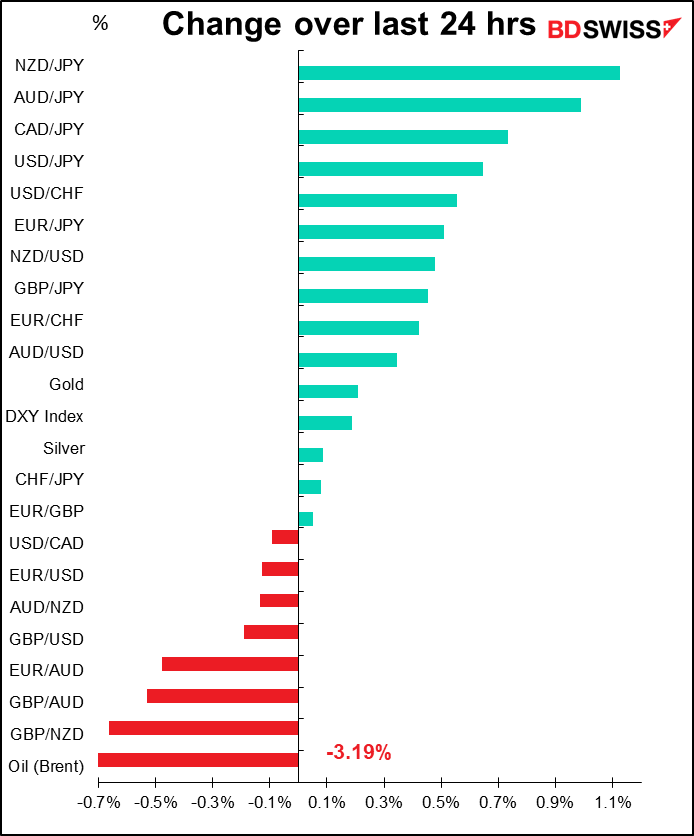 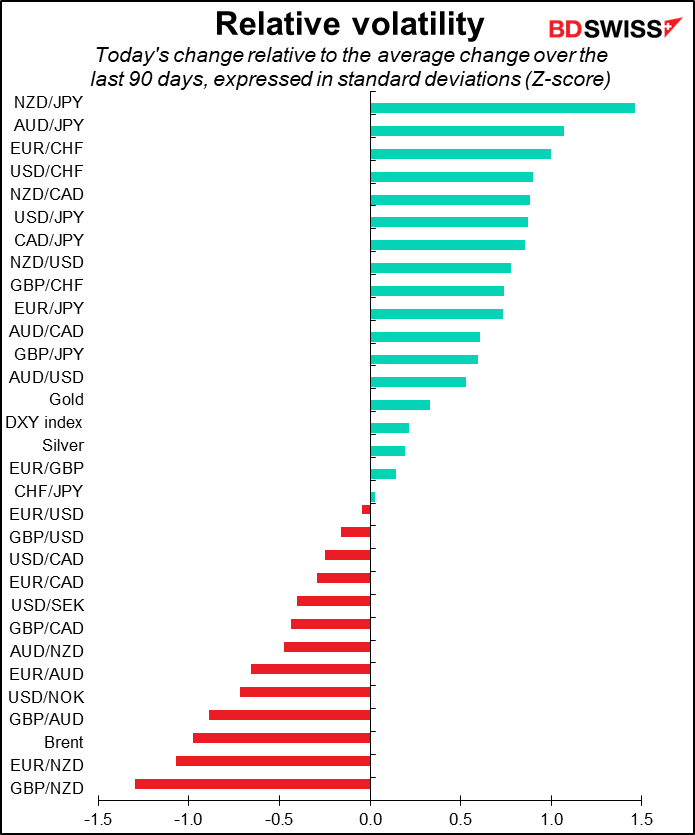