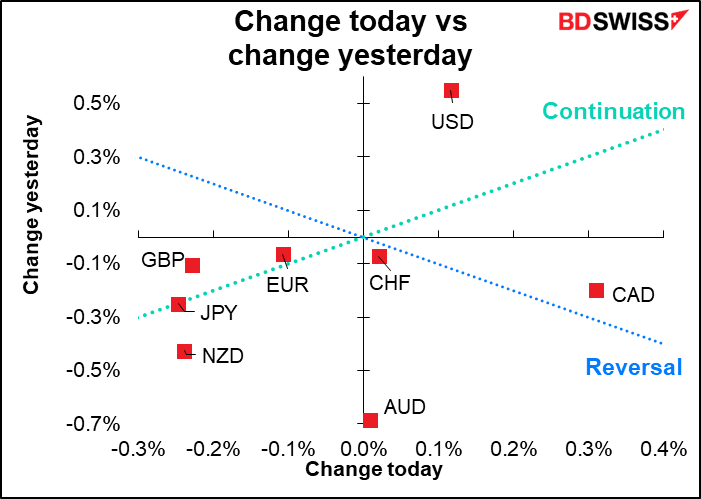 Talk about a damp squib! The Bank of Japan did finally change its view on inflation – in its quarterly Outlook for Economic Activity and Prices it now says “Risks to prices are generally balanced,” as opposed to “Risks to prices are skewed to the downside,” their view pretty consistently since 2014.

However, they barely changed their forecasts. They still see inflation staying well below their 2% target for the next two fiscal years.

Accordingly, they did not change their forward guidance – it remains biased toward easing, with no mention of normalization of policy. “For the time being, the Bank will closely monitor the impact of the novel coronavirus (COVID19) and will not hesitate to take additional easing measures if necessary, and also it expects short- and long-term policy interest rates to remain at their present or lower levels.”

Moreover, BoJ Gov. Kuroda surprised the market (well, me at least) in his press conference by pushing back against the idea floated in a Reuters story last week (Exclusive: BOJ debates messaging on eventual rate hike as inflation perks up) that the BoJ could start to normalize policy at some point even without achieving their 2% inflation target. He said there was no debate among board members on the possibility of a rate hike and that on the contrary, rates could be lowered further if necessary. He said he couldn’t envisage any situation in which the Monetary Policy Board would be discussing an exit from stimulus, contrary to what the Reuters bombshell posited. Only if they reach their 2% inflation target will there be a debate on normalization

To make matters worse, he continued with the traditional Japanese view that a weak yen is an overall positive for Japan’s economy, which really surprised me.

What is the inflation situation in Japan? We’ll learn the official number on Friday. Meanwhile if we look at the components, it might actually be a lot higher than what the official figures show. Much if not most of the decline is due to mobile phone charges, which the government has forced down. (Looking at my daughter’s monthly expenses for her life in Kyoto, I can easily believe that mobile phone charges are a major part of the CPI.) According to the following graph from Morgan Stanley research, inflation would already be 2% yoy if it weren’t for this government-mandated move. Once the reduction in mobile phone charges falls out of the yoy calculation we could see a very rapid change in the inflation picture in Japan and a correspondingly rapid change in the market’s view of JPY. 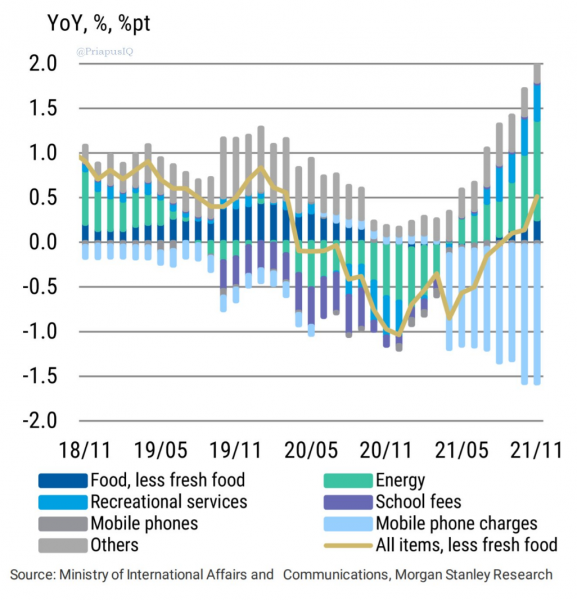 Elsewhere, oil continued to rise and CAD finally rose with it, correcting the somewhat anomalous movement we discussed yesterday. Yemen claimed to have launched a drone attack against the United Arab Emirates, the third-biggest OPEC producer, which caused an explosion and fire on the outskirts of Abu Dhabi, the UAE’s capital. The prompt time spread, the difference between the #2 futures contract and the #1 contract, continues to widen, indicating an increasingly tight market and a continued scramble in the industry to get hold of oil ASAP. 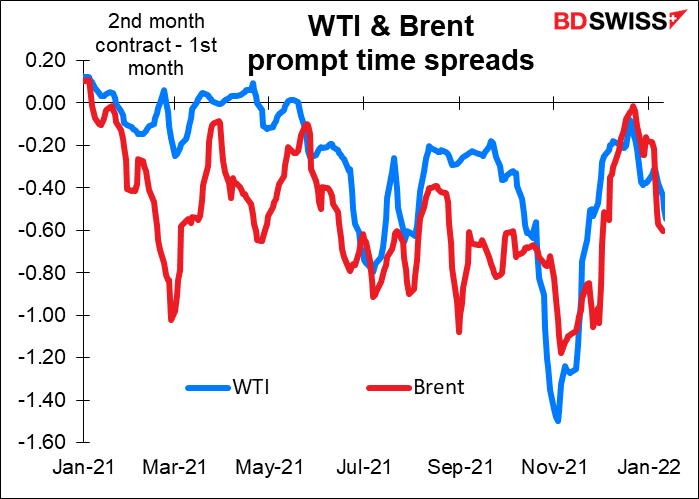 Russia, Ukraine and the euro

I haven’t talked much about Russia’s impending invasion of Ukraine. That’s because it seems that the market isn’t paying much attention to it, either. If we look at the options market, there doesn’t seem to be any concern. Three-month implied vol on EUR/USD options rose in late November, but that coincided with an increase in the realized vol as well. Since then implied vol has fallen to below realized vol, implying that people think EUR/USD will be less volatile over the next three months than it currently is – which isn’t particularly volatile, I should point out. 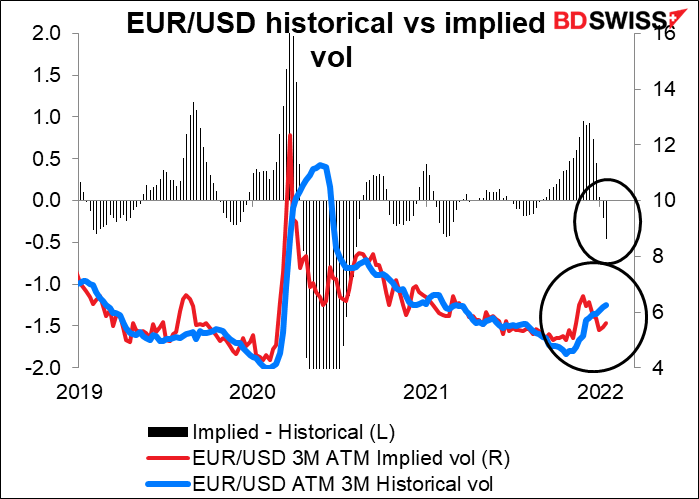 Nor has there been any major change in risk reversals (the difference in price between puts and calls). If anything they’ve gotten a little less bearish EUR except on a two-to three-month horizon. That could be a sign of some nervousness, but it’s barely perceptible. 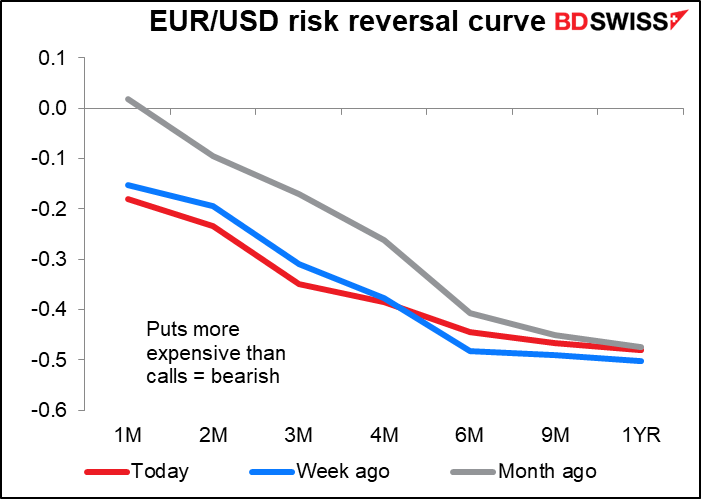 The market’s insouciance agrees with what happened during the last time there was an event like this, namely the Russian invasion of Crimea in 2014. That event didn’t put a dent in EUR. On the contrary, EUR/USD rose (i.e. the euro strengthened) as Russia moved in, although EUR/CHF moved lower (i.e., CHF strengthened relative to EUR). 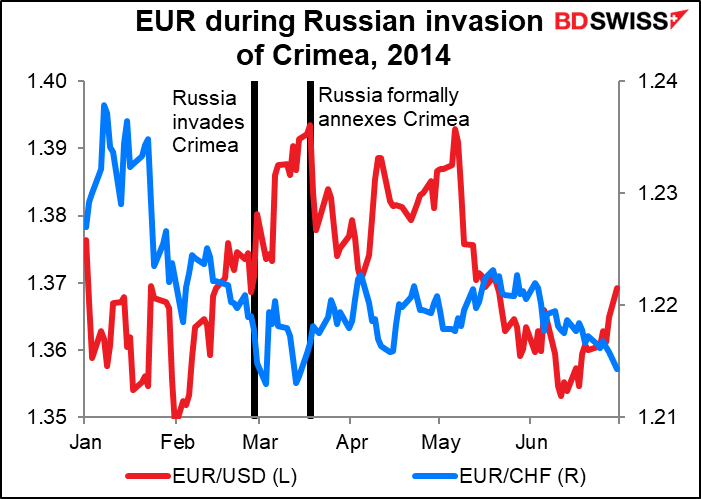 The options market then too was relatively quiescent. 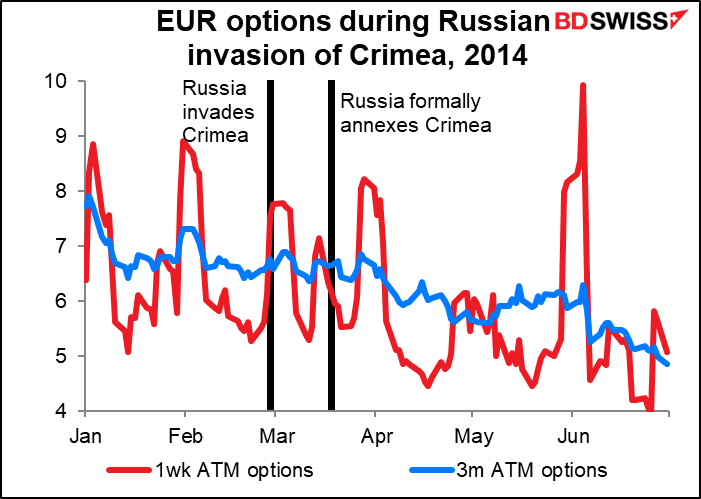 Perhaps the market assumes that this time too it would be no big thing. I must say though, when I see articles like this I begin to wonder. Ukraine said it had identified 106,000 Russian troops and 1,500 tanks near its border, and accused Moscow of pointing a “gun at our common European security.” NATO seems to believe the stakes are higher. And Europe is more dependent on Russian gas now than it was back then. I think the Ukraine issue could be a negative factor for EUR in the coming weeks. 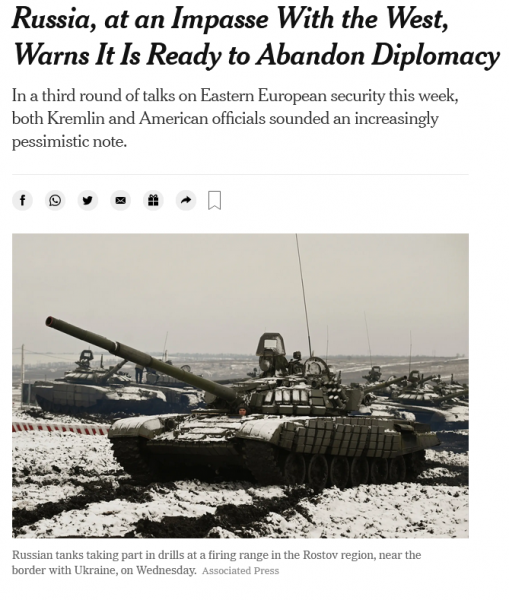 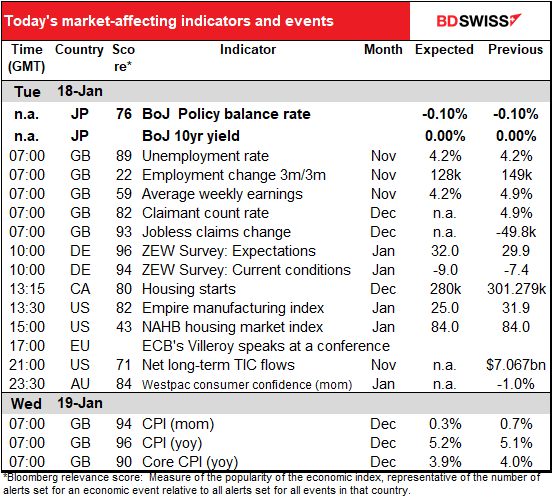 By now we know the results of the UK employment data. They were mixed; the unemployment rate fell by more than expected, but the number of employed persons rose only by about half as many as expected (60k vs 125k).

Note a new line in the table, “Payrolled Employees Monthly Change.” This is a new data series. It’s what moved GBP last month. It’s based on “Pay-As-You-Earn” (PAYE) tax information, i.e. the deductions from everyone’s paycheck. Note that it’s for December, not November, so it represents the most up-to-date data on employment. This will probably become the most closely watched labor market indicator for Britain. (The claimant count rate and jobless claims change, although also for December, were downgraded back in 2017 when the UK Office for National Statistics (ONS) stopped including them in its statistical bulletin because, it said, the series “may now be providing a misleading representation of the U.K. labor market.”)

As you can see, the payrolled employees data gives a different picture of employment growth from the overall employment data that we’re used to. That’s because a) the overall data is for a three-month rolling average, and b)  the PAYE data doesn’t cover businesses with only low-wage employees (making less than GBP 120 a week). 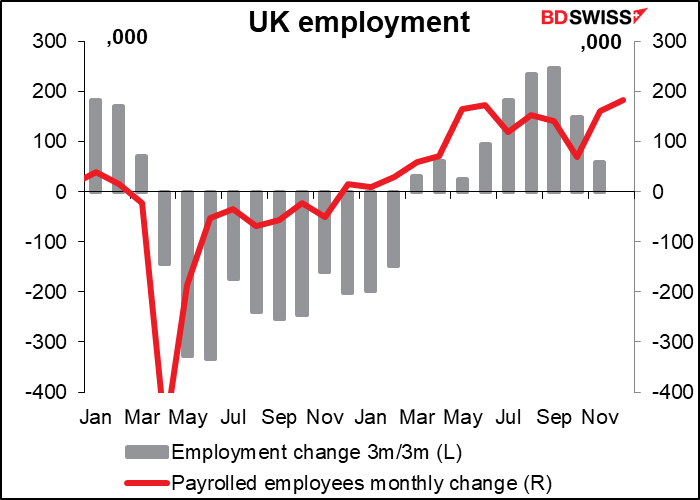 The Continental day starts out with the ZEW survey of pundits and economists. It’s more of a sentiment survey than a survey of people who actually do something and know something. It’s expected to show precious little movement… 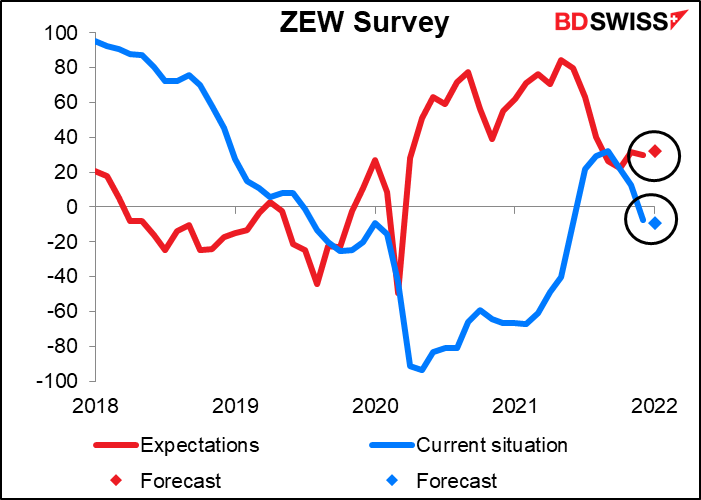 …considering that at this pace, there will be 3.5mn new infections in Germany in January vs 1.3mn in December. I suppose the current situation wasn’t considered so great before, nor were expectations, and there hasn’t been any change. 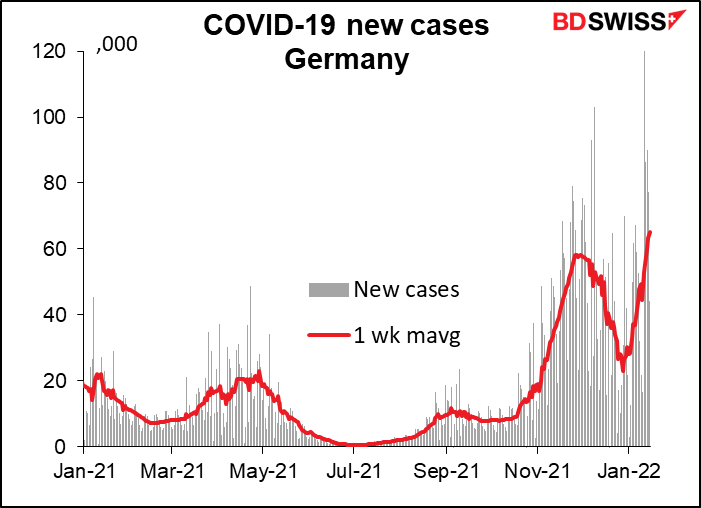 Canada’s housing starts are expected to fall to 270k – suspiciously close to the six-month moving average of 267.4k. Is that how people forecast these numbers? I could do that too, and I don’t even have a PhD. 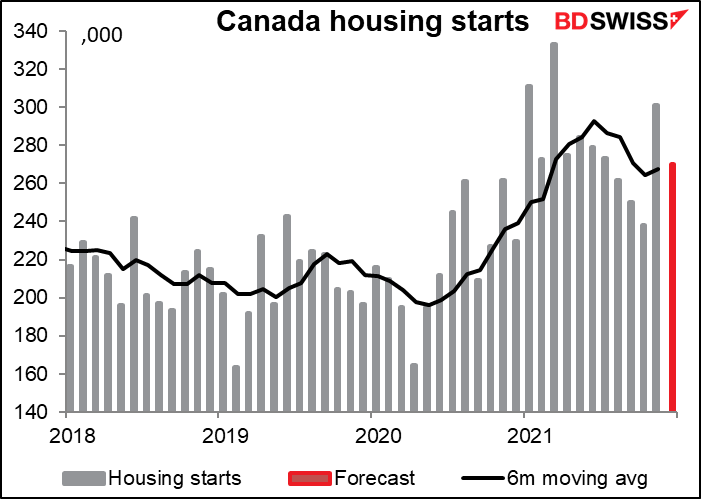 It seems to me that with the value of building permits climbing, starts should be climbing too. Perhaps they just got ahead of themselves last month. 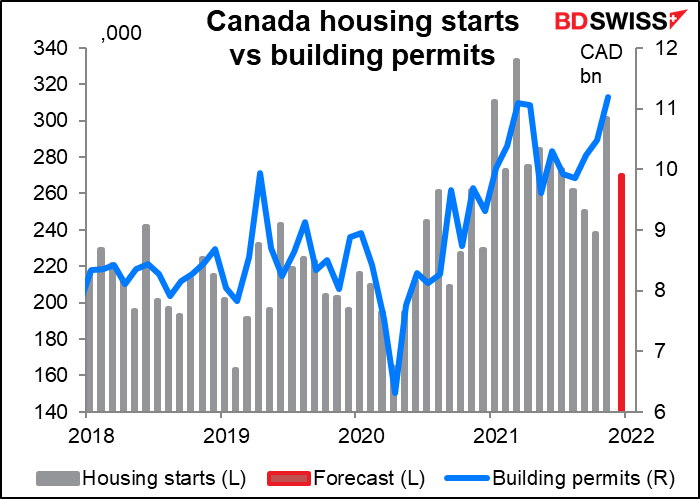 The Empire State manufacturing survey is expected to fall a bit while Thursday’s Philly Fed index is expected to rise a bit. I presume it’s because economists expect the two to converge over time. In any case, they’re both expected to continue to indicate relatively strong growth, which may be a relief after last week’s unexpected fall in consumer confidence. USD+ 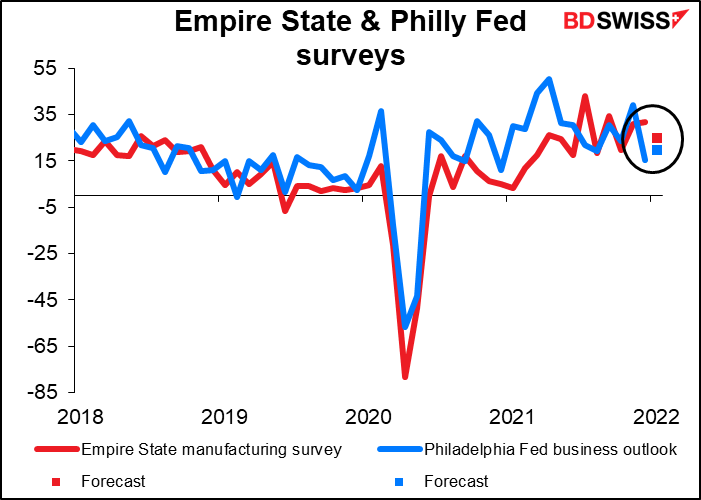 Then Wednesday morning at 7 o’clock as the day begins, the UK announces its consumer price index (CPI). Core CPI is expected to be down one tic, but headline CPI is forecast to be up one tic, moving higher into 5%+ territory. That’s probably the more important figure insofar as public relations matter. It won’t faze the Bank of England, which said last month that it expects inflation “to peak at around 6% in April 2022.” But it may reinforce the market’s expectations of further Bank of England tightening, which would be positive for the pound. The next BoE meeting is on Feb. 3rd and the market is discounting another rate hike of 15 bps, or looked at another way, an 88% chance of a 25-bps hike. 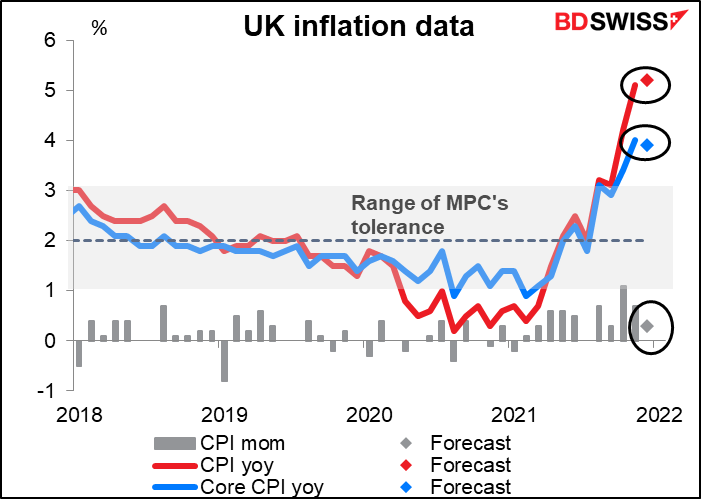 Nor is there any sign of inflation slowing. If we take the three-month change in the CPI and annualize it, we get a figure much higher than the actual yoy rate of change, and the forecast figure for November would just send it higher, to 9.0% (vs 5.2% yoy forecast for the headline CPI). As it stands now it looks as if the MPC’s forecast of 6% yoy inflation by April is entirely possible. 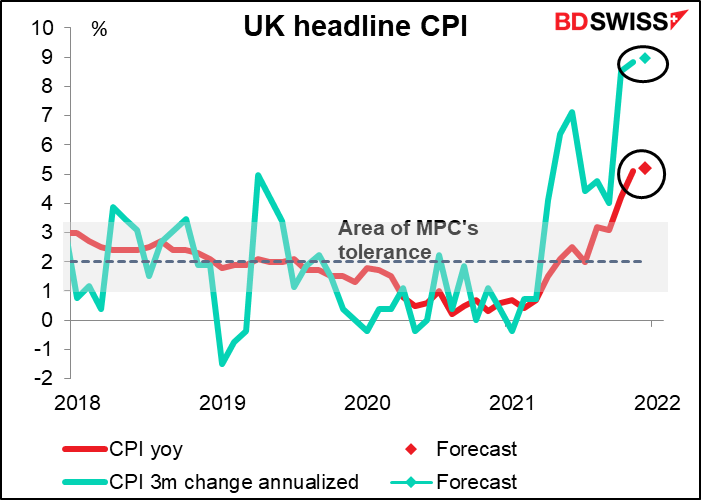 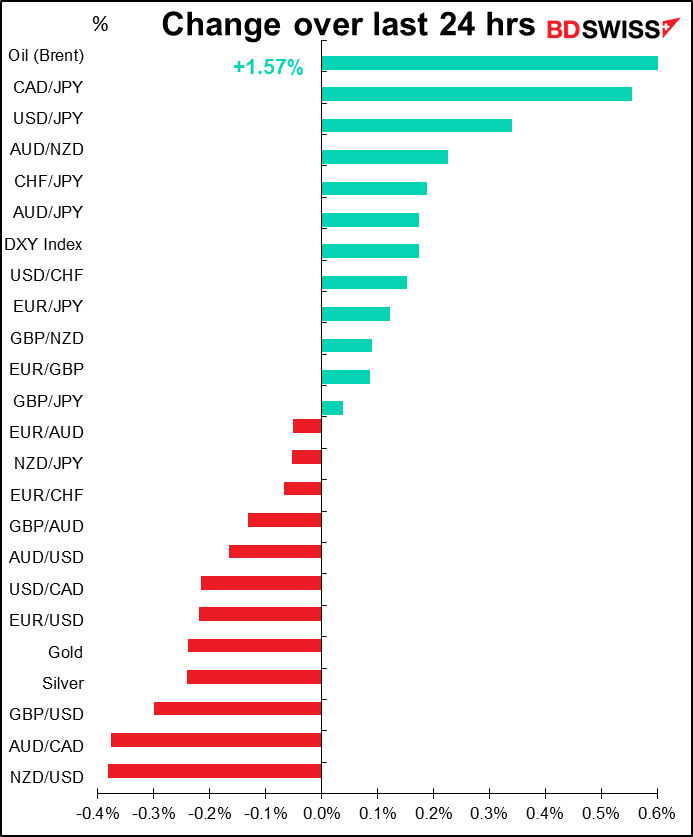