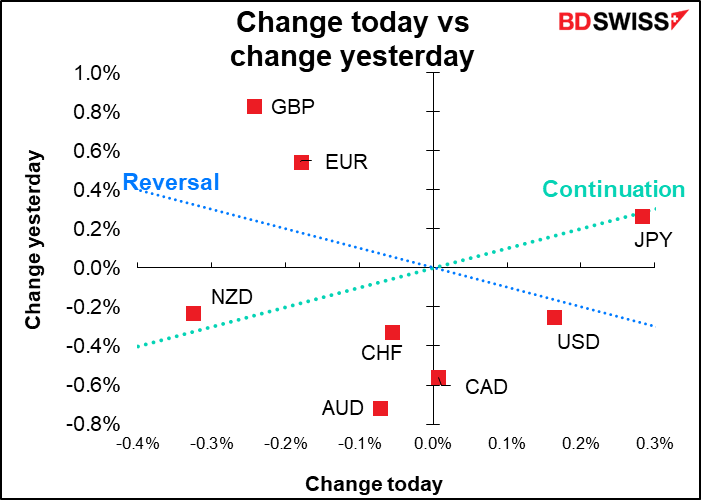 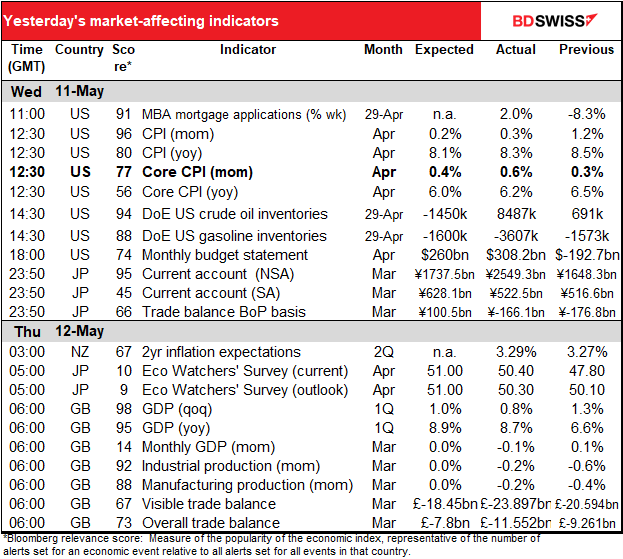 Official comments on fighting inflation dominated trading yesterday. NY Fed President Williams (V) reiterated the Fed’s plan to move “expeditiously in bringing the federal funds rate back to more normal levels this year” and said he thought there was a “good chance” the Fed could achieve “a soft, or soft-ish, landing” for the economy. Note the term “soft-ish,” which Chair Powell has also used. They are using this term to warn people that after all, the point of raising interest rates is to slow the economy, which inevitably leads to higher unemployment as a way of dampening demand. Williams said he “would not define a soft landing as unemployment staying at 3.6%,” i.e. get ready for higher unemployment.

Later, Cleveland Fed President Mester (V) supported 50 bp rate hikes at the next two meetings and put forward a similar view to that of Fed Chair Powell to bring the policy rate back up to neutral and then evaluate if more tightening is needed. However, she also cautioned that a 75 bp rate hike should not be ruled out “forever” and that the Fed could have to speed up in the second half of the year if inflation didn’t ease. She’s known to be one of the more hawkish members of the Federal Open Market Committee (FOMC).

US President Biden got in on the act too. He gave a speech on inflation, saying that fighting inflation is his “top domestic priority” and laying out his administration’s plans to lower prices on things like gasoline, which hit a record high on the retail market. He said the administration is considering cutting tariffs that The Former Guy put into place to help bring down prices, but no decisions have been made. 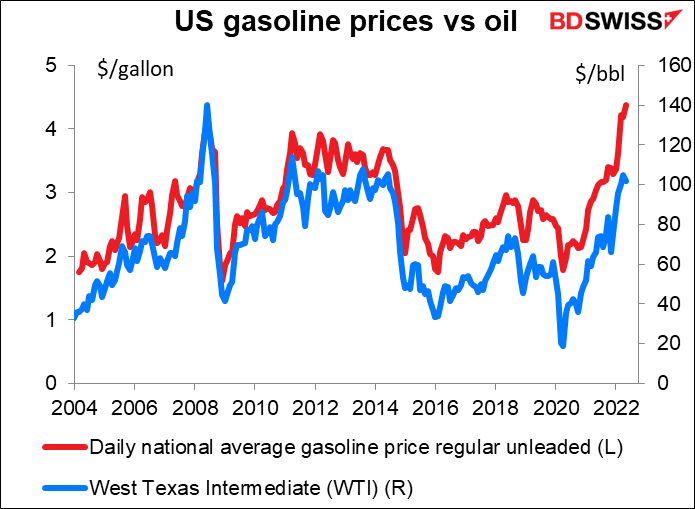 (President Biden might want to call up the heads of some of the oil companies and ask them why retail prices are so high. Not only is the retail price of gasoline at a record high, but the crack spread – the difference between the cost of a barrel of oil and the value of the products that can be refined from it – is also at a record high (data back to 1986). This means that a lot of the rise in the price of gasoline is because refiners’ profit margins have more than doubled just this year.) 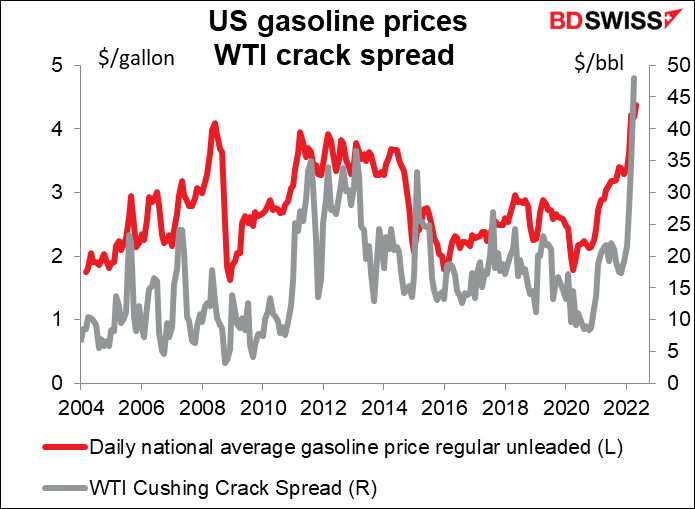 Apparently, all the talk worked. Inflation expectations plunged, especially in Europe. US five-year breakeven inflation rates are almost back to where they were at the beginning of the year. 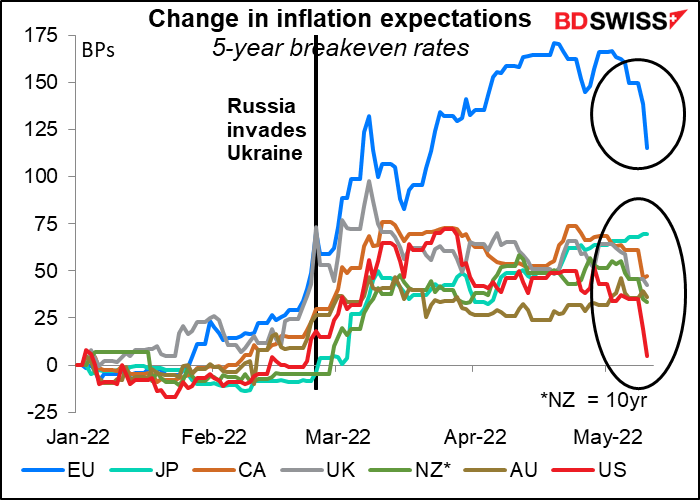 With inflation expectations coming down, bond yields fell too.

Lower interest rates globally are a support for JPY, where yields are frozen in place by the Bank of Japan’s “yield curve control” (YCC) program, which keeps the Japanese 10-year yield in a 25 bps range around 0.0%.

Note that yields in the UK came down by much more than inflation expectations did (-10.8 bs vs -0.2 bps, respectively in the 10-year sector) leading to a big drop in UK real interest rates. That might have been behind the decline in GBP. NZD also saw a fall in its real interest rates – or at least not a rise – which might’ve contributed to its decline.

Britain also had the State Opening of Parliament yesterday in which the government outlines its legislative agenda for the upcoming session in a speech that the Queen usually gives (but Prince Charles gave this year). There wasn’t any specific reference to Northern Ireland in the speech, but it did include the line “the integrity of the whole of the UK is of paramount importance to Her Majesty’s Government including the internal economic bonds between all of its parts.” The government’s explanatory notes to the speech said that “the Protocol needs to change” (the Protocol being the agreement between the UK and the EU on how the Northern Ireland border would be managed). UK PM Boorish Johnson yesterday told his Irish counterpart, Micheál Martin, that the current agreement with the EU was “not sustainable in its current form.” Needless to say the EU disagrees intensely. European Commission Vice President Šefčovič said “Unilateral action by the UK would only make our work on possible solutions more difficult” and that “renegotiation is not an option.” Opening this can of worms yet again risks a trade war between the UK and the EU that’s likely to hurt the UK economy much more than the EU. This is a big potential negative for GBP. 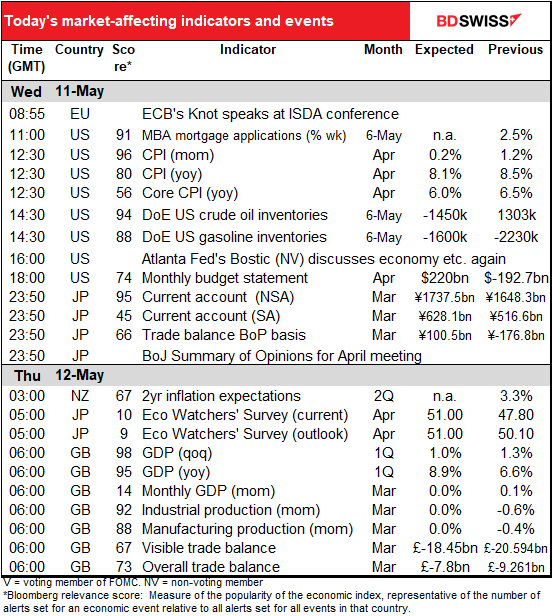 OK, two rather quiet days. Now finally we’ve got something to talk about!

The big item of the day is also the first:  the US consumer price index (CPI). Although technically it’s not the Fed’s preferred inflation gauge, in fact it’s what they refer to when they talk about inflation, which is why the market puts so much weight on it.

The CPI is forecast to fall a bit. Still remain far far above target, but at least on this forecast it may have peaked (as far as we know). 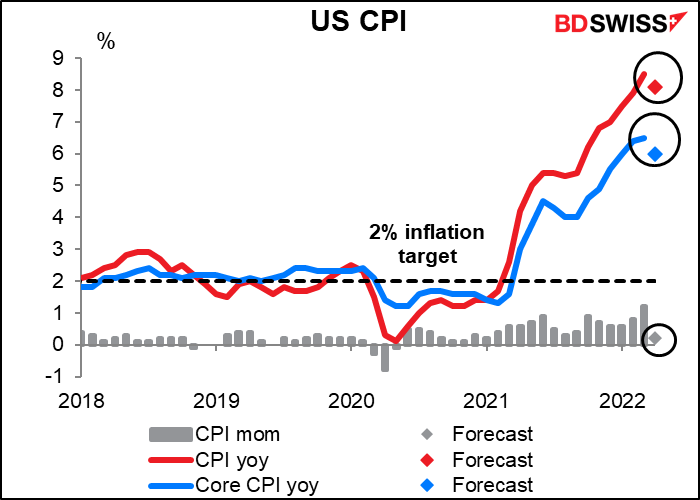 It’s the same when we look at the predicted 3-month change annualized. Still too high, but at least it’s not higher. This expected slowdown in inflation may confirm the Fed’s more tempered view and help stock markets to recover – while weakening the dollar. 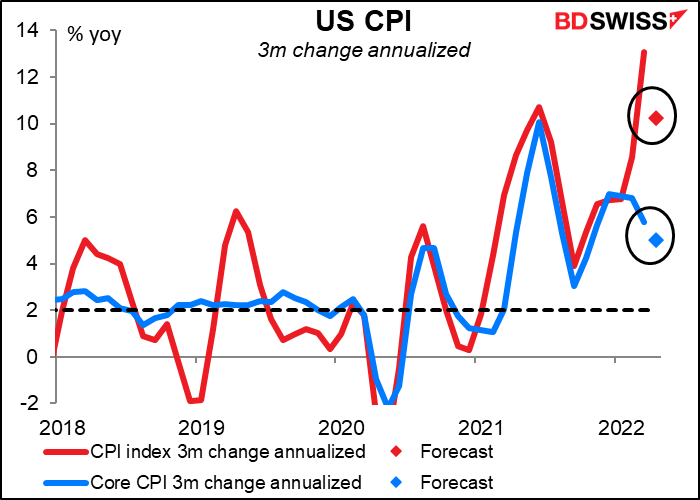 One thing aiding the decline is that used car prices have been falling recently. Used car prices have been one of the major The Manheim used car index has fallen for three months in a row.  It’s down 6.6% since January, its biggest three-month fall ever (data since 1995). The index tracks wholesale pricing though. Manheim estimates that “retail used car sales” fell 13% mom in April. This may indicate that some of the pandemic bottlenecks are finally widening (i.e. getting back to normal). 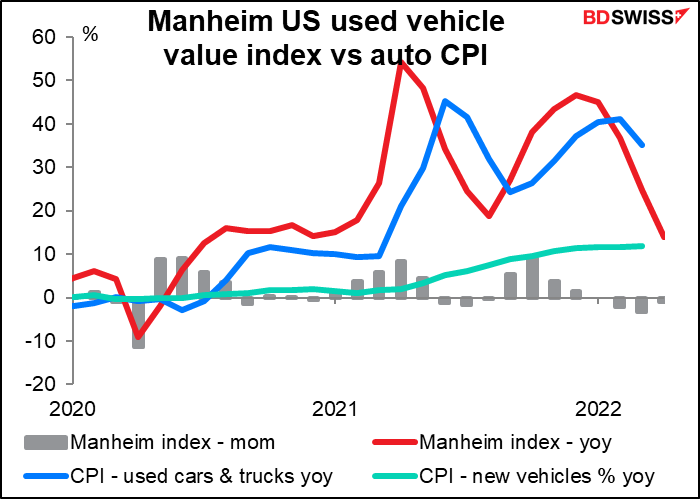 This indicator has an immediate and predictable effect on the dollar, which tends to strengthen when the indicator beats expectations and weaken when it misses. 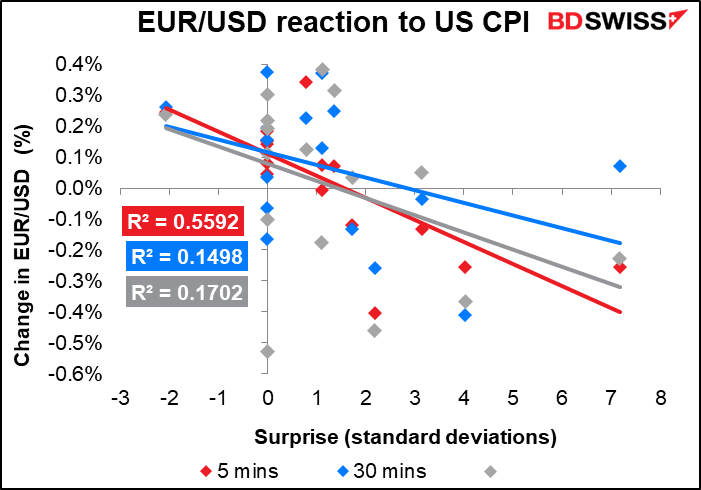 Actually, there haven’t been so many times that it missed expectations. Since the beginning of last year (the January CPI, which came out in February) it’s beat expectations 9 times, equaled expectations five times, and missed only once – and that was the January 2021 figure. Of course past performance is no guarantee of future performance, especially when we’re talking about something like this that people can learn. It could be that economists are getting better at forecasting inflation under current conditions and they won’t miss as much. Or it could be that inflation turns before they do and they start missing even more – but in the other direction! 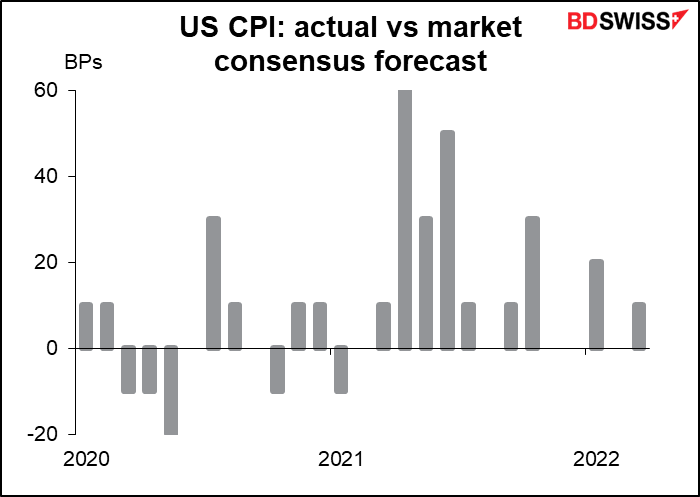 So far the dollar has tended to appreciate whether the CPI beat or just hit estimates. That might be because either way, it’s rising. 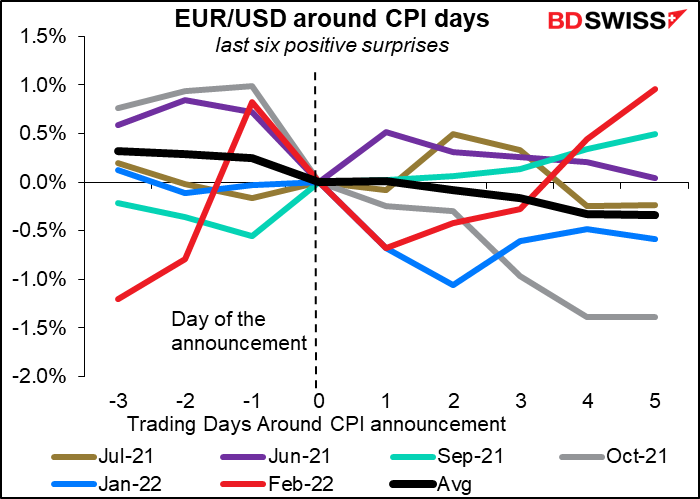 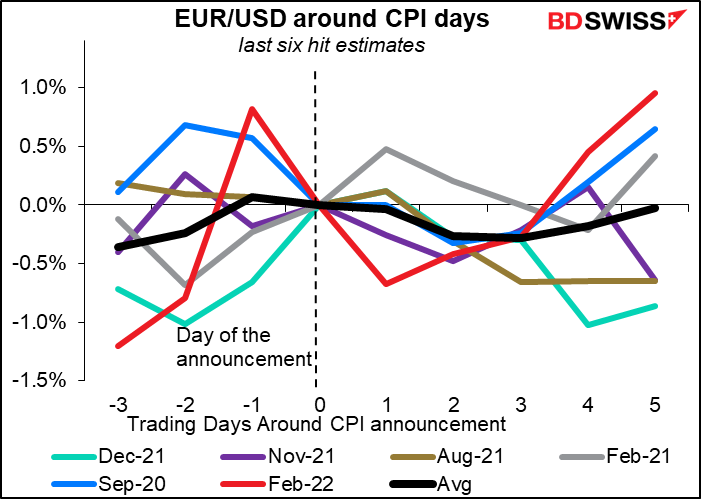 That’s the main thing for the US day.

Overnight, Japan announces its current account balance. This month’s figure may be of greater-than-normal interest because of worries about the impact of rising energy costs, which could send the current account into deficit again. However, the market consensus is for a slightly increase in the current account surplus, following the March trade data, which showed much smaller visible trade deficit for the month (JPY 177bn vs JPY 1.6tn the previous month on a balance-of-payments basis). In coming months higher interest rates should also boost the country’s income from overseas investments (known as the primary income balance), which may help to keep the current account in surplus. Whether that’s enough to counter the outflow on the financial account due to the ever-widening interest rate spread vs other nations is another matter, however. 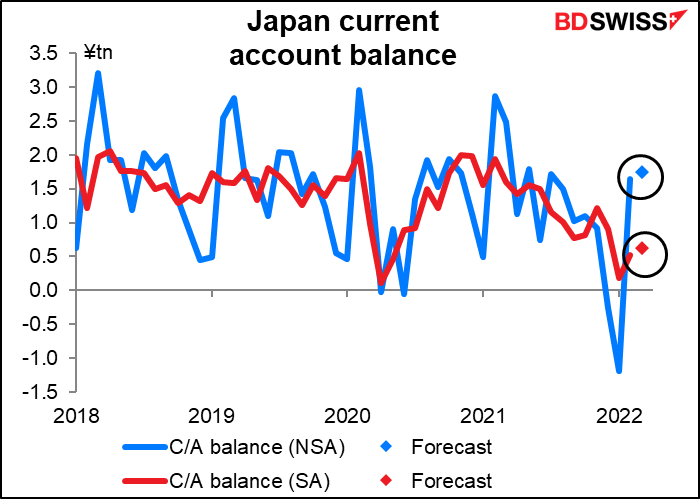 Although this has one of the highest Bloomberg relevance scores of any Japanese indicator, the currency market’s reaction to it is not particularly stunning. In fact it seems to have little predictable impact at all. In that case, why do I bother writing about it? Things like this make my life seem worthless, I have to admit. 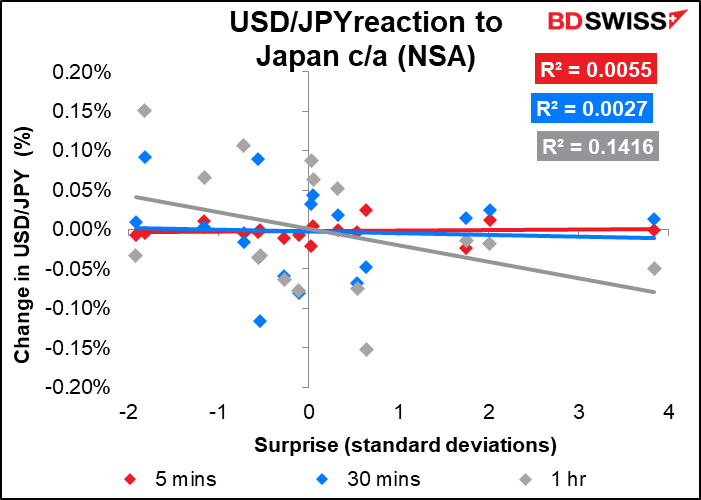 Usually the BoJ MPMs are no big deal and I haven’t paid much attention to them in years (I’m not the only one: the Bloomberg relevance score for the meeting is a paltry 76, vs 97-100 for every other major central bank including even the somnolent Swiss National Bank.) However financial market participants had thought that the BoJ might just possibly maybe perhaps tweak policy at the April meeting, for example by revising its forward guidance to neutral (which you’d know if you had read my April 22nd Weekly Outlook). But on the contrary, the BoJ doubled down on its current policy and announced it would buy Japanese Government Bonds (JGBs) every day to keep the 10-year yield from going above their 0.25% upper boundary. Enquiring minds will want to know a) did they in fact consider changing their guidance or policy, and b) what they thought about their yield curve control (YCC) policy in the face of the plunging yen and the worried comments coming from elsewhere in the government.

Japan’s Eco Watcher’s Survey has the lowest Bloomberg relevance score of almost any indicator I track. I just track it because I think it should be more important than it is. It’s expected to poke its nose over the line to “optimism,” which would agree with the service-sector PMI for the month, which at 50.5 barely managed the same achievement. (There appears to be only one dot because the forecast for both indices are the same.) 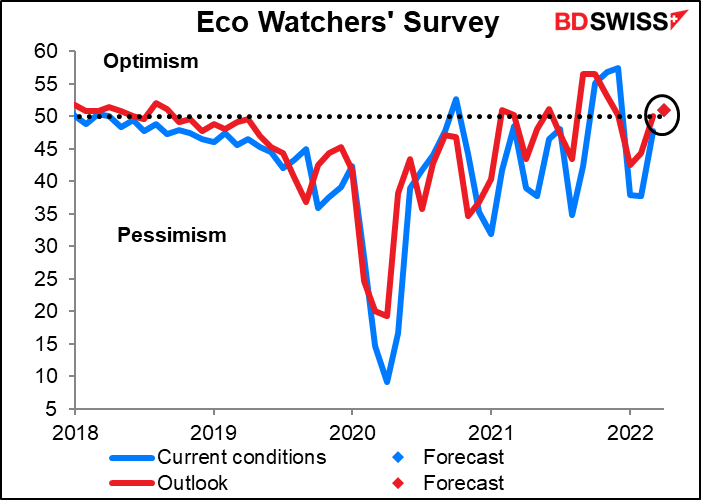 Then early in the morning Thursday, Britain explodes with data in the monthly “Short-term Indicator Day.” This time it includes the Q1 GDP as well as the March GDP, and of course the usual industrial & manufacturing production and trade data.

Q1 GDP is expected to be up 1.0% qoq, which is a bit higher than the Bank of England upgraded estimate of 0.9% qoq in its recent Monetary Policy Report. 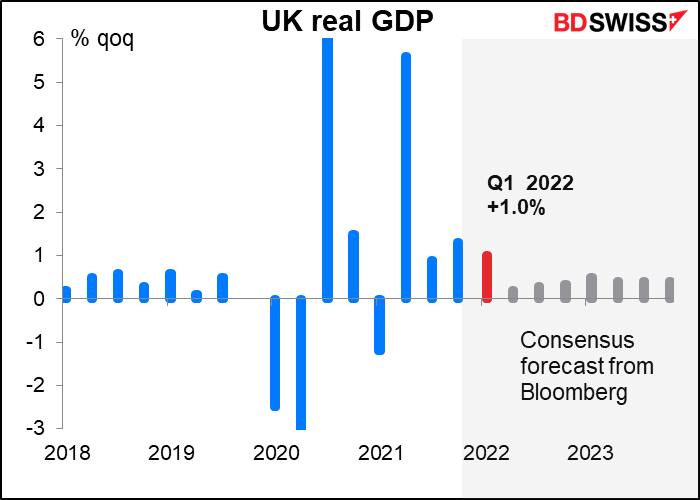 That’s great, but the March GDP figure by itself isn’t expected to be very good. It’s forecast to be unchanged mom (which is why there’s no red dot – you don’t get a dot for zero). This would mean growth was faltering through the quarter. If we continue the pattern then we’d expect to get a contraction in output in April. It could reinforce the idea that the Bank of England will hesitate to hike rates aggressively and could therefore be negative for GBP. 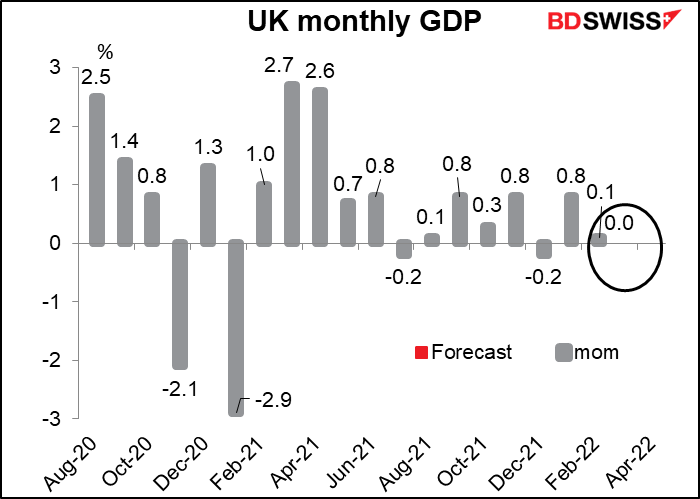 Continuing with the zero-growth theme, both industrial & manufacturing production are expected to be unchanged month-on-month. 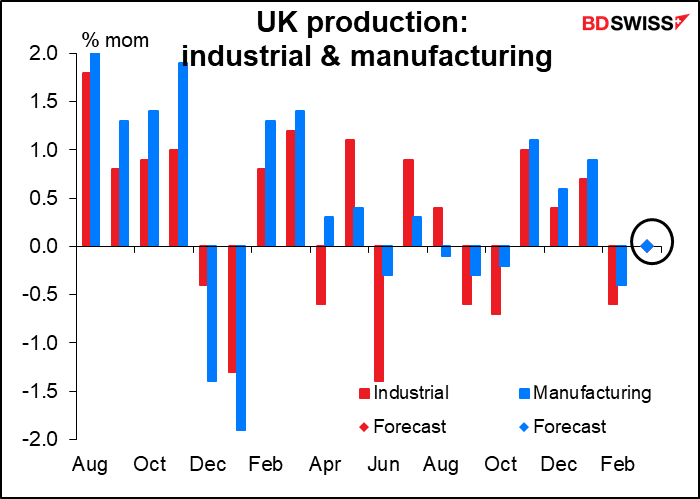 On a year-on-year basis, industrial production is closing in on no change at all, although manufacturing production is still up a bit. 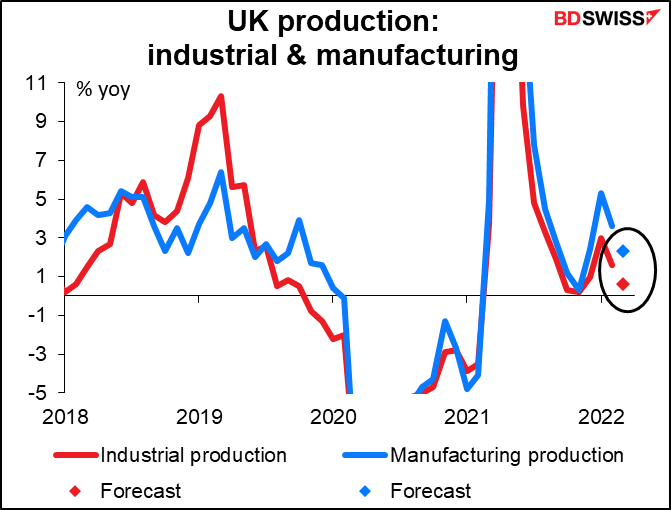 Meanwhile, the trade deficit is forecast to narrow slightly. That’s fractionally good news for the pound although if we look in the cause, it’s probably because imports are dropping, not because exports are growing. 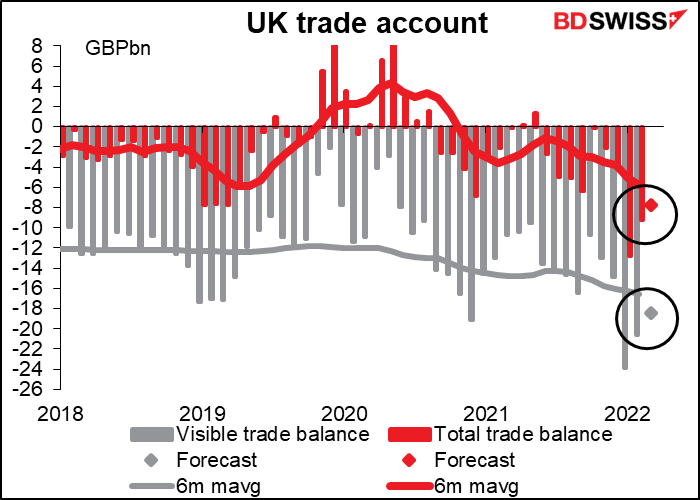 Net net, I expect the data will confirm the slowdown in the UK economy and boost the view of those on the Monetary Policy Committee who believe they should tread carefully lest they send the UK economy crashing into a recession. This would tend to be negative for the pound. 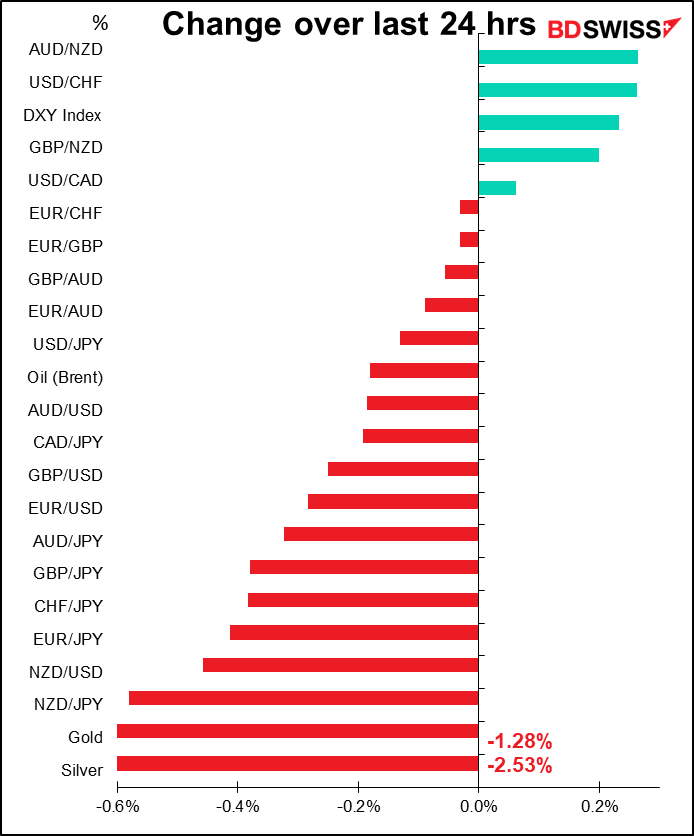