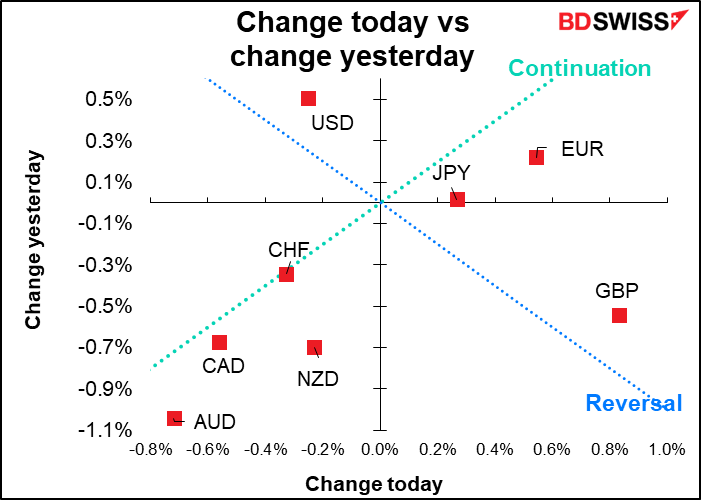 Russia’s Victory Day parade came and went without the game-changing announcement that many had feared. (I have to say “many had feared” because I wrote about the possibility and I don’t want to look stupid.) Nonetheless, the fact that there wasn’t such an announcement is important too, because reportedly Putin had told his generals to produce a victory by May 9th, and they couldn’t.

The speech only rolled out the tired old tropes & lies, such as : NATO is going to attack Crimea, Donbas, then Russia; Nazis are everywhere, but especially in Ukraine; and the West is weak.

On the other hand, the troop and equipment parade seemed smaller than in previous years. There was no aircraft Z-pattern overflight and no flight of the “doomsday aircraft,” Putin’s aerial command center. This was attributed to “bad weather” but in fact the weather was quite good. They announced ahead of time that there would be three T-14 Armata tanks in the parade but there were only two – did one break down? And General Gerasimov, the Chief of the General Staff and First Deputy Defence Minister, was absent – he’s rumored to have been wounded.

It looks from this like Putin knows he’s losing militarily, diplomatically, and economically, as well as perhaps the propaganda war. His domestic support is teetering and he can’t redouble his efforts. On the contrary he may be looking for a way out. This is good news, although far too early to count on it coming true.

Meanwhile, a US Defense Department briefing reveals that the Pentagon sees anecdotal evidence of numerous Russian mid-level military officers in Ukraine disobeying orders from their commanders. Morale problems and Russian logistics may be on Ukraine’s side.

Stocks fell further around the world as investors worry about the improbability of a “soft landing” in the US and elsewhere. Stocks are mixed in Asia this morning.

Various Fed officials seem to be trying to calm the storm that they started. Atlanta Fed President Bostic (NV) conveyed a similar message as Fed Chair Powell, saying that he preferred to take the policy rate to neutral and then “see what happens, see how the economy responds, see if inflation continues to move closer to our 2% target.” Bostic also noted that he doesn’t think the Fed needs to hike by larger than 50 bps increments, which he called “already a pretty aggressive move.”

Even though Bostic isn’t a voting member of the rate-setting Federal Open Market Committee (FOMC), he is an influential “hawk” and so his views suggest that a consensus is building around 50 bps hikes rather than 75 bps.

The market took out some tightening expectations on his comments. 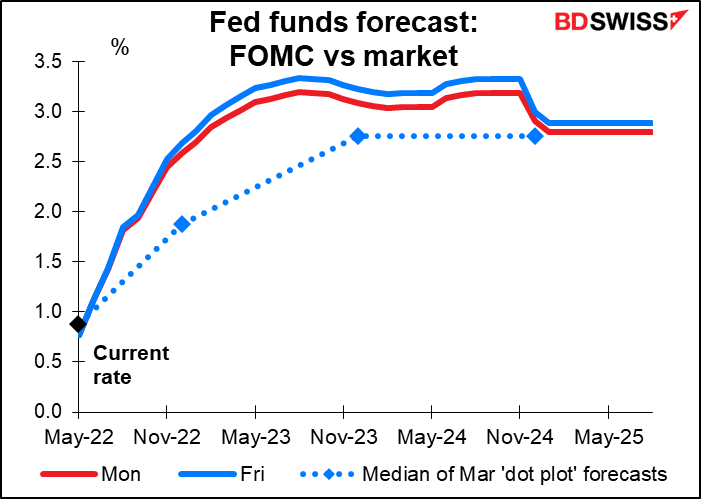 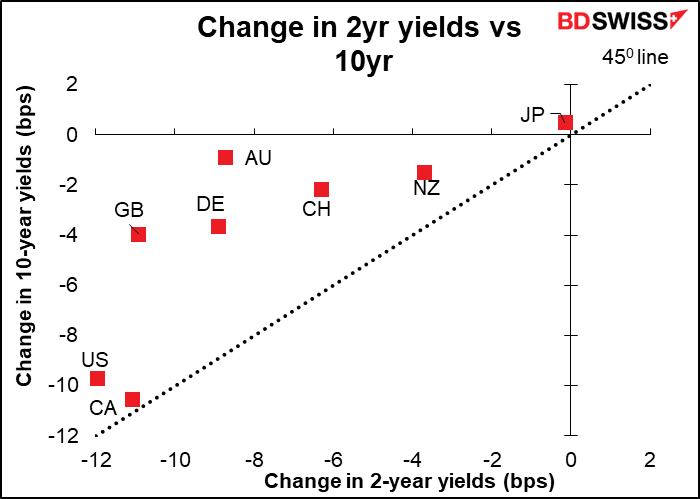 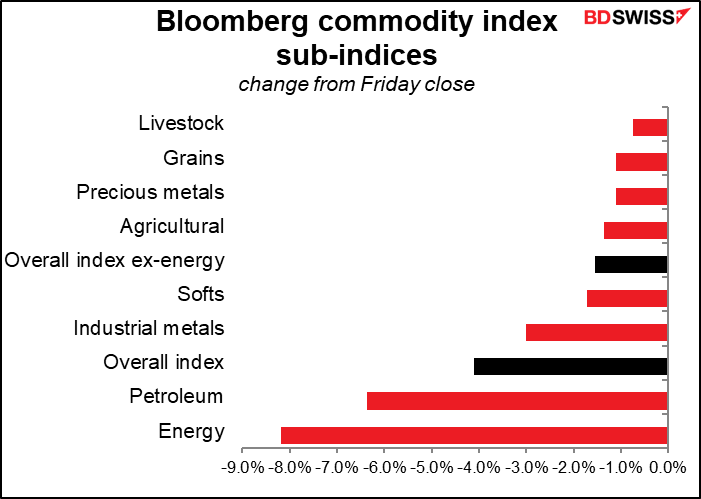 Oil prices were hit particularly hard as the European Commission watered down its proposals for cutting the continent’s dependence on Russian oil. According to the FT, it shelved its plans to ban the EU shipping industry from carrying Russian crude under protests from Malta and Greece. Meanwhile, Hungary is withholding its backing from a proposed EU ban on imports of Russian oil. Such measures need the unanimous approval of all 27 EU states.

AUD was under pressure from the risk-off environment. AUD/USD fell below 0.70 for the first time since July 2020 as the world was coming out of the first pandemic scare. 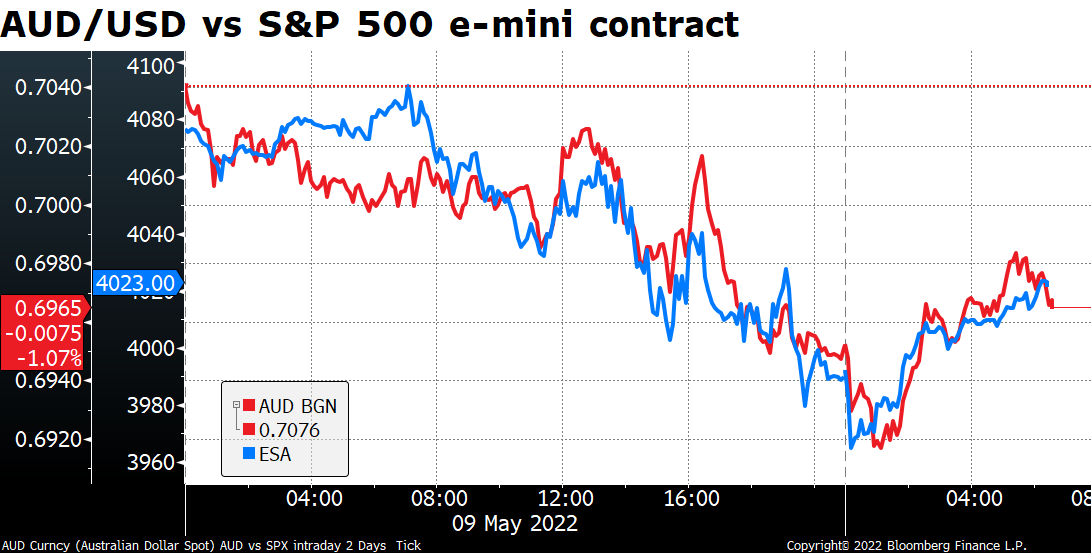 Within all this, GBP was the stand-out. Cable suddenly rallied from a low of 1.2261 up to 1.2406 before coming off somewhat. I’m not sure why. Some attributed it to a hawkish speech by Bank of England Monetary Policy Committee (MPC) member Michael Saunders, but on the contrary the move up occurred before he started speaking and the currency dropped like a stone afterward. Saunders has consistently been one of the most hawkish members of the MPC (he wanted a 50 bps hike at the last two meetings) and he continued to argue for front-loading the rate hikes, saying that “if monetary policy does not adequately lean against inflation pressures, then we may see a prolonged period of above-target inflation…that could ultimately require a sharper adjustment in monetary policy.” Nonetheless he noted that his recent votes for 50 bps “do not automatically imply that I would definitely vote for a 50 bps hike.”

It’s noticeable that while JPY benefitted from the safe-haven flows (as well as the fall in global bond yields, presumably) CHF did not. After gaining pretty steadily vs JPY for some time, CHF has recently been losing ground to what’s otherwise the weakest of the major currencies. This signals to me that something is up here. 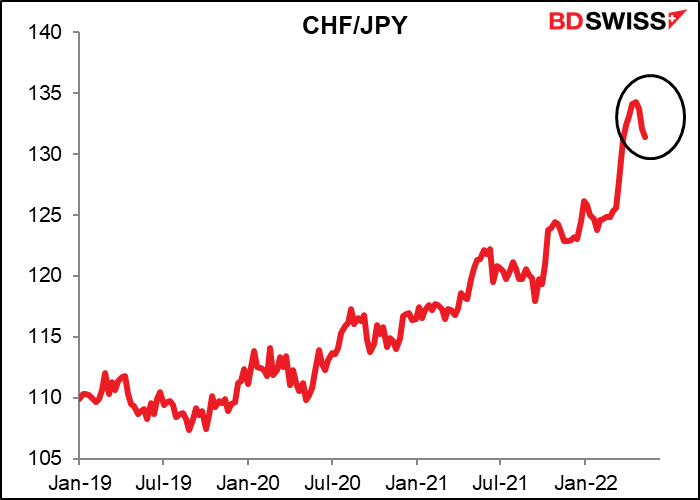 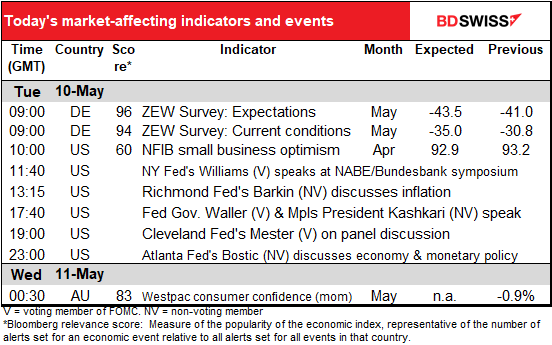 Yesterday was a quiet day for indicators and today isn’t much different.

The ZEW survey of some 400 German analysts, mostly in financial institutions with a few in companies, is more of an investor sentiment survey than a survey of people who actually do anything, like the PMIs or Ifo survey. (The ZEW or Zentrum für Europäische Wirtschaftsforschung is known in English as the Centre for European Economic Research.) Both the expectations and current situation indices are expected to turn lower, with expectations still running below the current situation – ie analysts believe things are going to get worse, not better. Seems reasonable to me, given the situation in Ukraine. 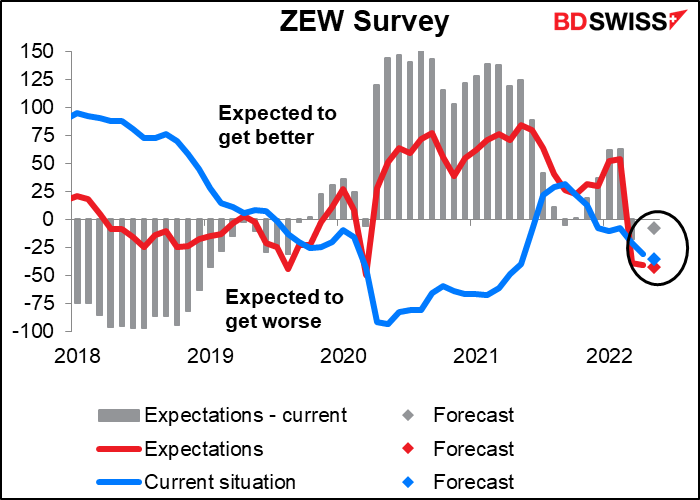 The National Federation of Independent Businesses (NFIB) small business optimism index is expected to fall minuscule. The hiring plan sub-index, which is arguably more important than the overall index, is released earlier and that was unchanged at a level showing still-solid employment hopes, as was the “jobs hard to fill” index. In other words, it looks like small companies are holding up at this point. 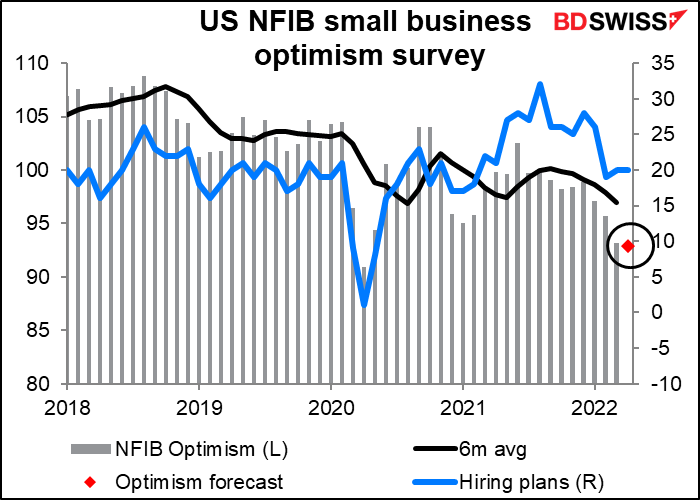 After that it’s just a load of Fedspeak, with three voting and three non-voting members of the FOMC giving us their views on the world. New York Fed President Williams’ keynote address to the National Association for Business Economics/Bundesbank economic symposium will be the highlight among these. The topic of the conference is From Global Pandemic to Geopolitical Conflict: Pathways for the World Economy.

Overnight we get the Westpac consumer confidence index for Australia. There’s no forecast for it, but here’s a graph anyway so you can see that it’s fallen five months in a row. Will this make six, or will sentiment improve? 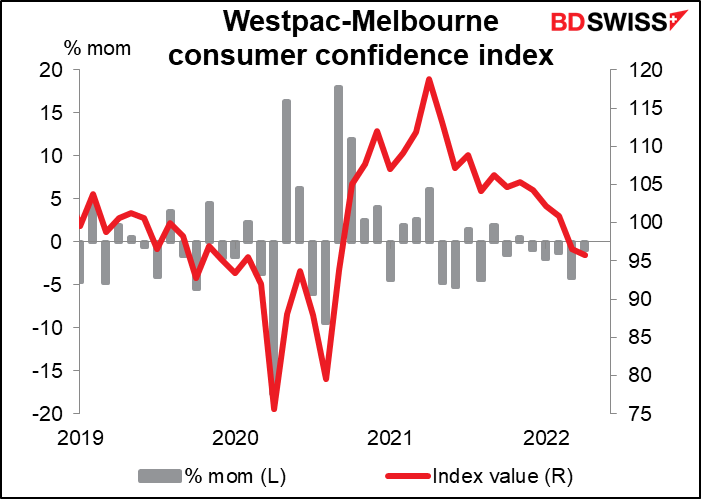 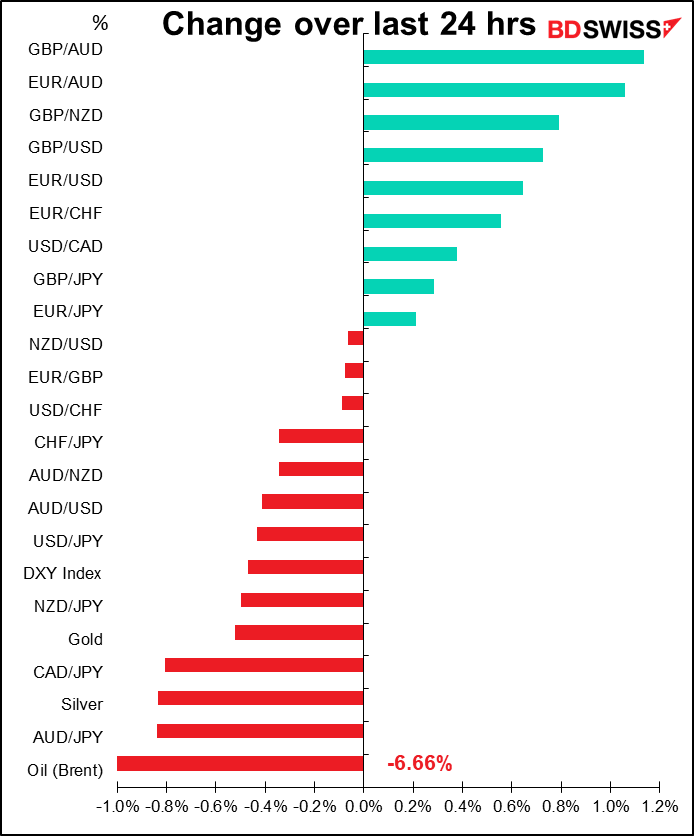